We seem to do this funny thing on vacation where we absolve ourselves of well, everything. We repeat mantras like What happens in Vegas stays in Vegas, or When in Rome… (insert destination of choice). Standards and self-control seem like distant concepts better left at home. And hey, that’s okay sometimes. We’re an overworked bunch of people who deserve to let loose every now and then. But if you’re anything like me, you suffer from some serious post-vacay blues, and let me tell you – when among all the kitschy souvenirs you’re also bringing back 5 pounds of pina colada weight. It’s not fun and it doesn’t feel good.

While I’m still prone to repeating the above mantras every now and then (and achieving the same disastrous results), in the past couple of years I’ve discovered that I enjoy a new type of vacation; one where my physical activity exceeds walking from the beach to the pool.

Here are the top three that stand out.

This now peaceful East African country is typically overlooked by tourists flocking to its neighbor, Kenya. And I won’t lie, Kenya is well deserving of all accolades, but it lacks one thing that Uganda has: mountain gorillas. These magnificent creatures are critically endangered; experts estimate that the total population is less than 900, and they only live in three countries: Uganda, Rwanda, and Democratic Republic of Congo. In order to fund and promote conservation, Uganda has created a tourist industry around gorilla tracking in the Bwindi Impenetrable Forest. I was already going to be in Uganda; I had to do it.

The name of the forest alone should give you an idea of what we faced. Our group of nine – two machete-wielding park rangers, two AK-47-toting police officers, six tourists and two porters set off in search of a particular gorilla family. The air was cool and damp in the forest, and the chorus of bugs chirping and buzzing was a surprisingly welcome backdrop. Our rangers were in constant communication with the trackers, but the gorillas always seemed to be one step ahead of us. I heard locating them could take anywhere from 1-10 hours and my fingers were crossed it would be on the lower side. The walk was steep and the forest dense, even as our guides hacked away at the dense greenery to create paths for us. I dodged earthworms the size of my feet and prayed we wouldn’t come across any territorial animals. While I knew they were there to protect us, I had some doubts regarding how effective the officer’s ancient Soviet-era rifles would be against an angry elephant. But lo and behold, after four grueling hours of trekking, right around the time my legs made the transformation into complete Jell-O, there they were.

I was awestruck – it was truly breathtaking to be in the presence of these gentle giants. Excitement coursed through my body; I immediately forgot how tired I was. We were allowed to spend one hour with them, and while we weren’t to get too close, they were free to approach us. At one point I completely forgot to breathe when a gargantuan silverback – the leader of the family- walked past me practically grazing my leg. It was humbling to be around creatures so humanlike.  I felt a sense of shame as I snapped away on my camera; the Gorillas seemed to be completely aware of what was going on, and they gave off an air of being annoyed, yet tolerant. The hour flew by much too quickly and before I knew it we were trekking back to town.

Full disclosure: I’m pretty sure I didn’t know Kyrgyzstan existed before I went. I certainly wouldn’t have been able to place it on a map, and it took me a good few times to get the spelling correct. This tiny Central Asian country is landlocked by China, Kazakhstan, Uzbekistan, and Tajikistan – the ‘Stans as I like to call them. I never planned to go to Kyrgyzstan, I mean, the entire region was largely absent from my consciousness but fate intervened. A night before some friends and I were set to catch a train from Beijing to Ulaanbaatar, Mongolia, we were presented with a compelling argument about why doing the “Stan” countries would not only be more exciting, but also more in line with our budget and timeframe. These fellow travelers made Kyrgyzstan sound so appealing it didn’t take much persuasion at all.  The next day we rerouted ourselves there by way of a 72-hour, hard-seat-only Chinese train. I really could end the story there, because that journey may have been one of the biggest ass-kickings of all time. 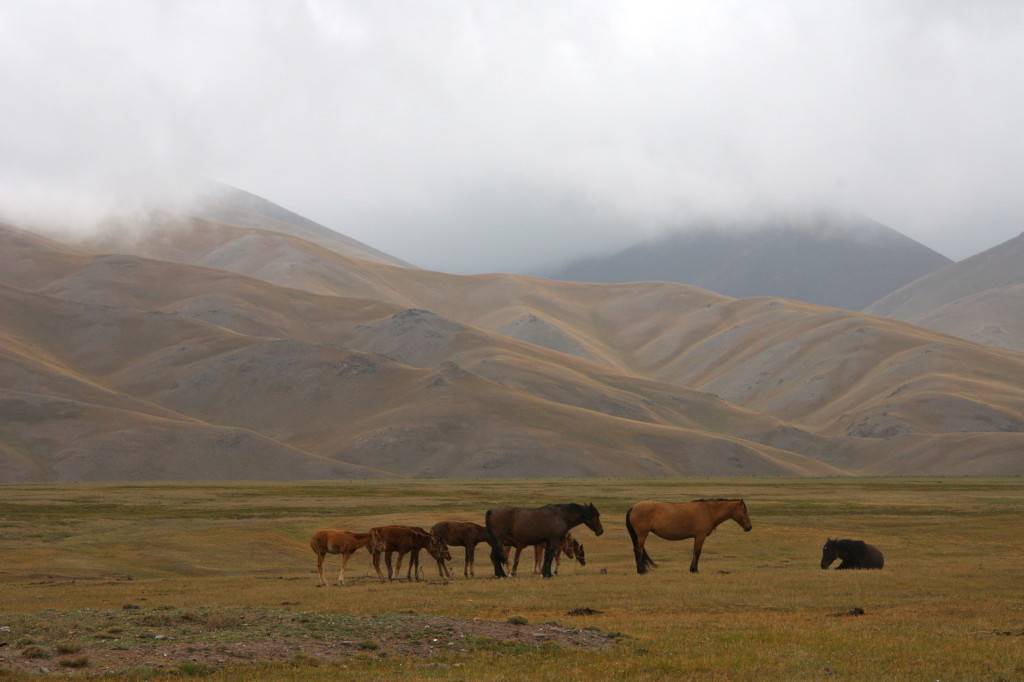 We arrived in Kyrgyzstan tired, dirty, and beaten down but utterly in awe of the landscape and hospitality we encountered. We spent our first few nights in a tiny village with a local family who took us in when we had nowhere else to go. We slept huddled around a wood-burning stove and woke up early to help them milk their cow (guys, it’s harder than it looks) and admire the snow-capped mountains in the distance. It soon became clear to us that while we may have been ignorant to Kyrgyzstan’s many charms, others weren’t. The country draws a certain type of badass traveler – mainly hardcore trekkers, mountain climbers and long distance cyclists.

Inspired, we decided we too would be badasses (at least to the best of our abilities). We hiked through the fairytale-like walnut forests of Arslanbob, which is also a skiing destination in the winter months.  We convinced seasoned trekkers to show us the ropes, and while we didn’t have our own tents, we yurt-camped next to the world’s second largest alpine lake, Issyk-Kul. Our trip culminated with a three-day glacial lake trek outside of Kochkor, where we discovered one of life’s greatest pleasures: going to sleep at 8 pm after a long day of physical exertion. We pushed ourselves and were greatly rewarded by scenery so beautiful that as I conjure up images in my head while writing this, I’m filled with emotion and gratitude. While I’ve always maintained that it’s nearly impossible for me to choose a favorite country, Kyrgyzstan will always reside near the top of the list.

I know what you’re thinking, how could I possibly get my ass kicked in a country whose main source of revenue is literally creating a relaxing paradise for tourists? It turns out that the Dominican Republic has so much more to offer than most of us are aware of. But first, in the spirit of openness I’ll be honest and tell you my first week in the DR was spent at a resort. Not my style, but it was a free family trip, and I decided to make an experiment out of it: one week at the resort, one week discovering the real Dominican Republic. The resort kicked my ass in its own special way; I certainly learned I have a tendency to excess when it’s an option. I spent the days guzzling watered-down sugary cocktails in a horizontal position, sometimes by the beach, sometimes by the pool. The only decision I had to make was what I was going to eat (hint: it was all-inclusive so everything). After seven days of unrestrained gluttony, it was with my jeans a bit tighter that I exited the resort through a large steel gate and crossed the dusty road to wait for the bus.

I was slightly apprehensive about my solo time in the DR, simply because there is very little information on non-resort travel available. Luckily, I remembered that I had a Dominican friend, Alejandra. We met a few years back while I was traveling in Jordan. I reached out to her and it just so happened that not only was Alejandra free the entire week, but she’s also something of a Dominican Republic travel extraordinaire.

With Alejandra’s guidance, it didn’t take me long to realize the Dominican Republic is extremely underrated and overlooked as a non-resort travel destination. Purely logistically speaking, it’s easy and inexpensive to find a direct flight, travel time is short, and there is no time change for those of us on EST. Besides that, the DR really does have it all; mountains, rivers, beaches and culture. Which is exactly what I needed; with my cheat week behind me, it was time to undo the damage I had incurred.

I spent the first few days of my solo time exploring the country from one waterfall to the next, through a series of busses, motorbikes (in the DR they are fitted for two passengers!) and hiking. It was rough – I was struggling after my week at the resort, but each waterfall was more beautiful than the last, the water shades of turquoise and blue I had never seen before, so I kept going. Evenings were for salsa dancing, not resting, and I slowly began to shed those piña colada pounds. I spent my last few days in Las Terrenas, a beach town that all beach towns should strive to be like.  Our days were filled with exploration; why settle for one beach when there are so many?  We ATV’d and hiked our way to at least ten beaches until we found what we were looking for: a postcard worthy stretch of white sand completely devoid of other people. Let me tell ya, you won’t find that at a resort.

Wherever you decide to go – whether it’s a destination known for extreme activity like Kyrgyzstan or one known more for it’s pools and parties, there are always waterfalls to be explored, bikes to be rented and hikes to be had. There’s nothing quite like returning home from vacation tanned and toned, in better shape than when you left.