Future Tense is a monthly series in which the reader chooses the outcome for next month’s chapter. Don’t spoil the story! Catch up by reading chapter 1 here and chapter 2 here!

Jane reacted the only way she knew how. She tightened her grip around Garret’s neck and with all the force she could muster, dove headfirst through the destructive rain of the bullets and detritus. The exit was too close to give up now. Wyatt screamed after Jane and Garret, “What the fuck are you…” he stopped, dumbfounded. One second Jane and Garret were standing at his side and in the blink of an eye the door to the exit was closing and he was alone. 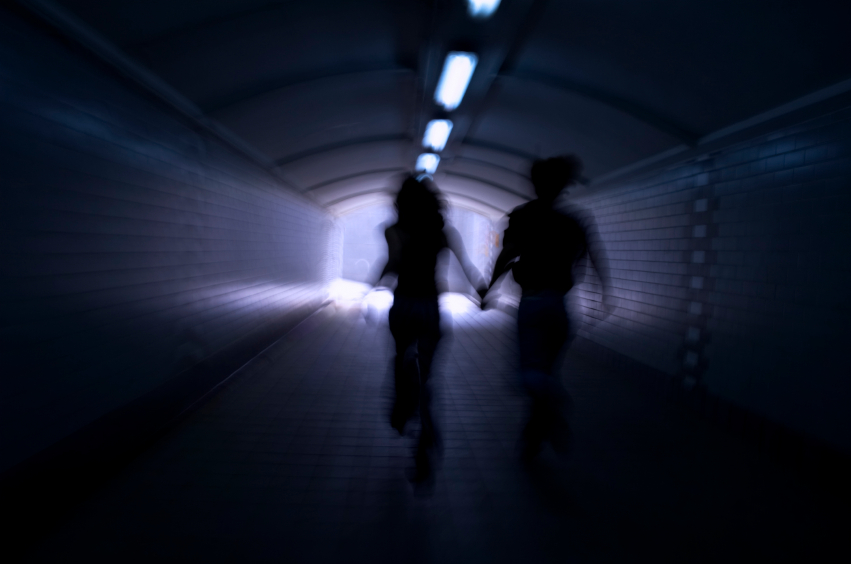 Jane opened her eyes to the sensation of pavement digging into her knees. She looked up from her spot on the ground and was greeted by the brightness and warmth of the sun on her face — forcing her eyes closed once again. She hadn’t experienced natural light in what seemed like a lifetime. The ear-clapping sounds of gunfire vanished as if they never existed. She rotated her stiff neck to the left to make sure Garret still clung to her shoulder. He was doubled over, vomiting. A particularly yellow portion of the contents of his stomach splashed at the impact, coving the terrycloth layer of her hospital slippers.

“What the hell just happened?” he uttered between heaving breaths. He spat a viscous string of bile from his mouth.

“I don’t…know…” Jane recalled the gunshots and the panic and diving for the door, but everything after was a blur.

“It was nighttime when Wyatt and I broke you out…How –” he trailed off, realizing Wyatt wasn’t with them. “Wait, where is Wyatt?” Garret stood up, wobbling and disoriented. Jane stood after him and noticed the focus wane in his eyes, which swam in their sockets before he toppled over again. With lightning reflexes she snapped to her feet to brace her savior from the effects of gravity. Any pain that existed in her body from the crash, which she’d just felt moments ago in the cramped quarters of the hospital basement, were gone. She braced for the surge of discomfort and overcompensated, almost knocking Garret over with the force of her body catching his. He must have weighed just under 200 pounds – she could feel the tendons in her right elbow tense up until she thought they would snap like a rubber band being pulled in opposite directions. Garret opened his eyes, panicked at the sensation of falling and the two crumpled into a tangle in the parking lot.

Her body landed on top of his and he instinctually wrapped his bulky arms around her body, cushioning her fall. Then they both broke out into uncontrollable laughter – severing the tension between the two strangers. Jane couldn’t recall the last time she laughed. Memories from before the accident were murky in her mind’s eye, but something about Garret felt familiar as she lay upon his chest. His eyes met hers once again – he could see the tears welling up.

Jane absorbed her surroundings – sunlight, blue skies, clouds and antique automobiles surrounded her. She remembered seeing renderings of the vehicles from the turn of the twenty-first century in school, but never in real life.

“What’s wrong?” he asked, resting his hand gently upon her bruised cheek.

“It’s nothing.” She lied. In reality they were tears of joy, after the events of the past few days she wondered if it was still possible to laugh – it was.

Garret brushed her auburn hair from her face and nestled two greasy locks behind her ear. Garret was about to speak, but his words were interrupted by the blaring of a car horn barking disagreement with their position on the concrete in the middle of the hospital parking lot.

The noise startled Jane – she jumped up, and reeled backward in a state of shock.

“Get out of the way you idiots!” The man behind the wheel yelled at the couple.

Jane absorbed her surroundings – sunlight, blue skies, clouds and antique automobiles surrounded her. She remembered seeing renderings of the vehicles from the turn of the twenty-first century in school, but never in real life. Nothing around her made sense and Garret knew it. He put a hand on her back and guided her to a prone position.

“Breathe, Jane.” He urged as calmly as he could.

“What’s….going….on” she rasped between shallow breaths. The car honked again – the man pounded his fist on the side of his vehicle and shouted at them once more.

“Go around us, you dipshit!” Garret screamed “She’s sick for fuck’s sake!” The man behind the wheel flipped them off and maneuvered his car around them.

“Where are we?” Jane croaked out in a voice just above a whisper.

“Bullshit…how?” It was the only reaction Jane could sanely have to being told that she was a time traveler.

“Wyatt and I were sent here to bring you back home.” Garret explained. “We don’t know how you ended up here, but it took us years after you disappeared to figure out how to track you and find you.”

Jane paced back and forth, every direction she turned confused her. Garret had to be telling the truth – the trees and grass were green, alive and healthy. She walked over to a patch of grass and touched it with her remaining hand. She’d nearly forgotten about the stump that was her left arm. The grass felt nothing like the AR grass in her world, which, she guessed was technically the future. This grass wasn’t interpreted through a series of vibrations translated via wearable technology, it had a rubbery quality to it. When she squeezed it between her fingers it squeaked from the friction of her skin – the sensation surprised her and she grabbed a clump in her hand and ripped it from the ground like a child. She brought the clump to her face and took a deep whiff. She’d never smelled anything so fresh. The only way she could describe it was “green” – it smelled green. Jane broke from her trance of wonderment when Garret touched her shoulder.

“Come on, we need to get out of here – I have a feeling the Architects are close behind.” He urged.

Garret produced a touch screen from his pocket, tapped and swiped the screen then let out a grunt. “Goddamnit, how is that possible?”

“Hey! I’m not going another step until you give me some fucking answers!” Jane finally lost control of her emotions. A loud ding sound erupted from Garret’s touch screen, “What now?!” She yelled.

Garret stuffed the screen back in his pocked and grabbed Jane by the shoulders – his actions weren’t tender, they were necessary to break Jane from her excitement. “Listen!” he breathed heavy, his face inches from hers, “There’s a lot I don’t even know, but you have to listen to me!” He calmed his tone, “We’re not safe here. That sound you just heard is an alarm. Meaning there’s an Architect within 1000 feet of us. I don’t know where my brother is and I intend to find him, but if they get ahold of you then there’s no hope for any of us. Do you understand?!” He tightened his grip on her, “We need to move, now.”

“I had no idea Wyatt was your brother.” She spoke sheepishly.

“No, he is my brother — don’t speak about him like he’s not alive. You’re going to help me find him. You have no idea what you’re capable of. Come with me and I’ll teach you how to –” Garret fell to the ground as the report of a single gunshot bounced off the hospital and reverberated throughout the parking lot. He let out a painful cry and his hands covered the open bullet wound in his shoulder before he fell to his knees. 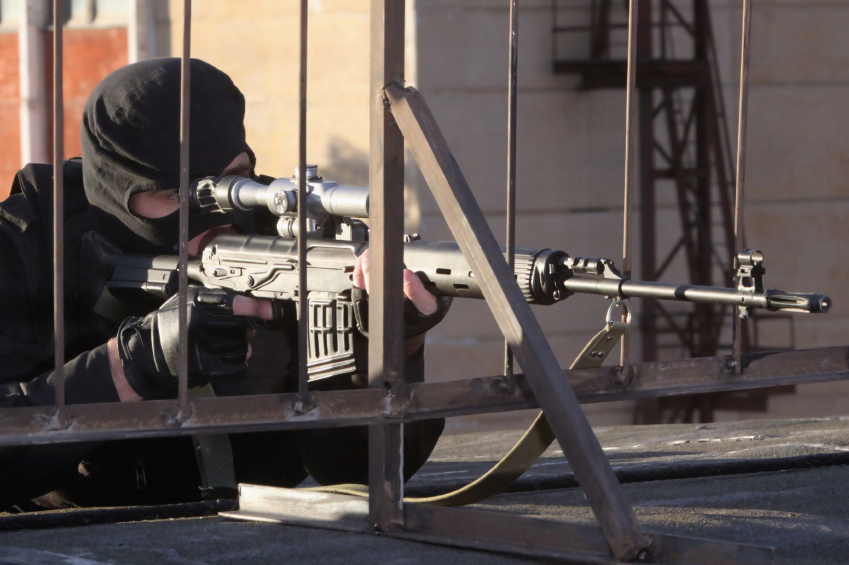 Time slowed for Jane as she surveyed the area. Her eyes caught the silhouette of a man in black atop the hospital. She glanced to Garret on the ground, a steady stream of blood pried its way between his fingers, painting his hands in a sickening crimson. Her eyes went back to the man on the roof – the sunlight reflected off the scope on his rifle, obstructing his location from her view. She had a split second to react.

A) Jane dropped hard to the ground. As her body met the pavement she maneuvered into a roll, finding shelter behind a vehicle. The concrete where she stood a second earlier exploded as a 50 caliber bullet tore into the surface. Garret flailed his arms to her, indicating that she should run.

B) Jane locked her sights onto the sniper. She could hear the yells from Garret urging her to drop and get to shelter, but she ignored him. Instead she walked toward the gunfire, if she was going to die, she would die on her feet.

C) Jane knelt beside Garret and helped apply pressure to the wound. She recalled the medical supplies he pilfered from her hospital room and pulled them from his left pant pocket. There was a small bottle of disinfectant and a large roll of gauze. The ground next to her cracked and spit debris into her face. She felt the bullet whiz by her ear. The next shot would surely be the last, she had to move fast.