Until I was 14 years old, I had always wanted to be a professional gymnast…but according to everyone else, flying between uneven bars and performing back handsprings is impossible for anyone over 5’4. It must have been a universal fact that any tall person could never be a break-dancer or pole vaulter either because when I tried out for my school teams, I was laughed at. No matter how many wishes I made I was not getting any shorter, so I gave up on my dreams. Until I met Dixie James.

“No new mother wants to hear ‘your child will be born with Down’s Syndrome’” Having maintained a healthy lifestyle throughout pregnancy, Dixie James did what almost any mother would do and started asking “why me?”  “I never did anything wrong…I ate right, didn’t do drugs. Why was this happening to me?” Dixie became glued to her rocking chair, knowing she would have to give up her personal goals and dreams to support a child that would never be able to live what most consider a “normal life”. But Dixie is far from normal. With the right attitude, Dixie transformed what could have been a nightmare into an opportunity. 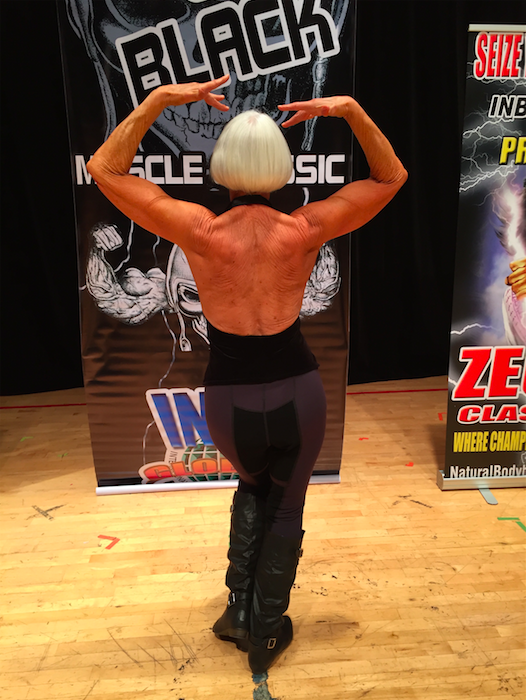 Dixie’s introduction to motherhood was a perpetual cycle of chasing ambulances, visiting hospitals, and meeting with different doctors.  By day Dixie was a full-time super hero, helping her daughter, Holly, fight the battles against heart failures. By night, she was a watch-guard, making sure that her daughter’s heart didn’t fail while she slept. She was Holly’s rock, support, and cheerleader, but could that possibly be all she was meant to do?

Although Dixie was only 33, she was prepared to sacrifice her retirement plans to provide for her daughter; but abandoning her dreams of having a fulfilling life was harder than she thought. Tired of questioning “why me?”, she finally ended the relationship with her rocking chair and channeled her sadness into motivation.

“I knew I was not good for anyone like that; not my daughter, not my husband, and definitely not myself”. For the first time, Dixie had channeled her super powers onto herself and realized that in order to support her daughter, she needed to be emotionally and physically stable.  “I started walking, and every time I went out and walked, I didn’t think about anything sad, I just felt good”. Dixie’s new escape became a hobby and soon enough, she was no longer chasing ambulances, but chasing marathons around the world.

“I became a race walker and saw other women doing marathons and thought ‘if she can do it, so can I!’”. Before she knew it, Dixie had completed 26 marathons, achieving distances up to 26 miles in under 5 and a half hours. Her tenacity took her around the world, participating in races all around the States, Africa, Singapore, Canada, and the Fiji Islands.

Dixie’s newfound ambition showed her that down’s syndrome was a part of her life, but did not control her life.  By changing her perspective, Dixie stopped asking “why me?” and started asking “why not?”. Though people called her crazy, she started climbing mountains at 56 years old. Just two years later, she had swum to the island of Alcatraz 10 times and climbed Mount Kilimanjaro. Pushing herself to the next level, she climbed Mount Fiji and Mount Shasta three years later.

Although she was not always the first to finish the swim, race, or climb, Dixie constantly reminded herself that she was “not getting any younger” and when she felt weak or tired, she reminded herself that her daughter’s struggles were far worse. She was finally able to be the mother her daughter needed, teaching Holly that Down’s Syndrome did not control their lives; her positive attitude paid off. Although Holly was expected to face many social and physical challenges, Dixie’s drive had motivated her to not only find a stable job, but also a loving husband.

At 63 years old, Dixie’s new son-in-law paved the way for her new bodybuilding lifestyle. To her amazement, her daughter’s husband was not only a powerlifter, but an individual born with Down’s Syndrome. “If he can have that kind of discipline, then I definitely can” she thought.

Dixie trained for months, changed her nutrition, practiced posing routines, bought the heels and bikini and thought, “I am disciplined…I do not care if I win or how old I am, I just want to do something I’ve never done”.

Dixie has gone on to win first place in countless Physique, Figure, and Sports Model competitions testing her strength and pushing her boundaries. “That’s my passion. ‘Why not’. Set yourself a goal no matter what age you are!’” she tells me as I worry about having to go back to my college courses.

After 10 years of competing in bodybuilding shows, Dixie has decided to conquer her next challenge; training to swim in the National Games in Birmingham, Alabama.

Dixie’s life “has been so much richer” because of her daughter’s condition. In 2012, the two wrote the book Holly, capturing the experiences and blessings that down syndrome has provided their family.

A change of perspective. That’s all it takes to turn “why me?” into an opportunity. “I am the lucky one. I am so blessed to have a special daughter. There’s so much that I wouldn’t have done if it wasn’t for her and knowing there is not a struggle harder than what she faces.”

Here I am, 21 years old, evaluating how I have given up my dreams of becoming a gymnast, break dancer, and a pole vaulter because I am taller than average. My entire life, I was told that anyone 5’9 could never possess those talents especially if they did not train in their childhood. I have given up trying to achieve those dreams because I believed that I am too old; yet here is this woman, who at the age of 56, decided to start climbing mountains, swimming in races, and competing against athletes half her age.

I have spent too long in my comfort zone embracing excuses and believing those voices that once told me “you can’t” and “it’s not possible” because of my physical traits. It took Dixie three years to turn her depression into motivation, but she did it. She silenced those doubtful voices, changed her perspective, and went after her dreams.

Dixie is 73, and though her skin may show it, her strength has kept her youthful and hungry for more out of life. “The fountain of youth is exercise. All you need is self- confidence and loving who you are no matter what your condition is. True happiness comes from finding your passion and living your life around that passion. Many people don’t realize what their passion is but I’m the example that it is never too late to try.”

Thanks to Dixie, I’ve regained my courage and am taking gymnastics classes twice a week, because why not?