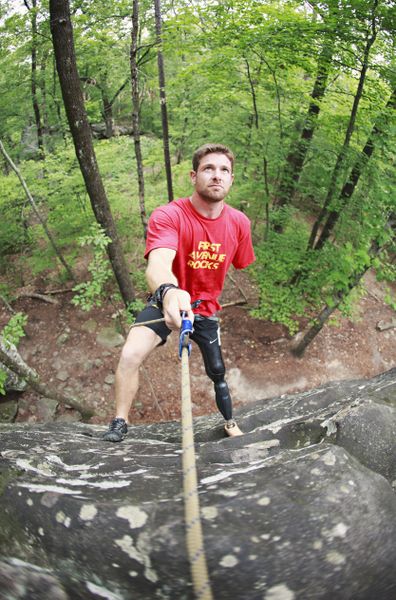 Noah Galloway was a soldier in the Army serving with the 101st out of Fort Campbell, KY deployed to Iraq for the second time in 2005 where an Improvised Explosive Device (IED) injured him. Noah lost his left leg above the knee and his left arm above the elbow. As a highly active individual, Noah was left devastated by the thought of not being able to remain as physically active as he was in the past. Through several years of struggle, Noah learned to not only cope with his injury and new appearance; he managed to reinvent himself as a competitive athlete and motivational speaker.

I had some questions for Noah as he prepares for upcoming events:

What is your next big challenge?

The men and women I served with were the ones that inspired me to become active again and push myself like never before. Today, it is actually the people that I motivate and inspire that do the same for me. I get countless messages on Facebook, Twitter and via email from people, some who are disabled, mentally or physically sick, and ultimately, my story. To know that I motivate and inspire so many people around the globe helps me not only stay grounded but it also pushes me to maintain my healthy lifestyle and train like a machine.

What do you do during your “down time” when you are not at the gym training or traveling to events?

All of my spare time is dedicated to my children. As a divorced parent, I cherish every minute I get to spend with my two sons

and daughter. I have three beautiful young children that are an incredible source of inspiration and motivation to me.  They are all very young so they still do not understand just how they motivate me to work harder and become not only a better father, but also a better athlete. I train and live the way I do because I want my children to grow up knowing that there is nothing that they cannot achieve in life if they put forth the effort.

How do the Quest Nutrition bars fit into your diet and how do you believe they have benefited you?

I am always on the move between raising my children, training at the gym, working, public speaking and competing. I really felt like I needed something to help me between meals, as snacks, and if needed, as a substitute fuel. Quest Bars have done just that, they provide me with the fuel I need post-workout, while I’m running around, and very often as a midnight snack. The bars have helped me maintain a balanced diet especially during highly intensive training times.

Are you planning on slowing down anytime soon?

Not at all, I feel like I am just getting started. Besides my CrossFit competition next month I am planning on competing yet again in multiple obstacle course races. I will be running The Bataan Memorial Death March in White Sands, NM, and I plan on running more marathons this year. I am looking forward to finding new challenges in which I can push my physical and mental limits further and continue to inspire other to do the same while staying healthy.