Have you ever felt the tug at your heart that you knew your life was destined to be something more? That where you were in your present moment was just a lie?

Lets rewind to my childhood.

I loved to play outside, swim, dance, run and be free. I loved being social, spending my time with school friends and cousins – I was a normal child who loved life… except for one thing.

I knew I was different than the other kids. Why? I was overweight… and no-one was afraid to tell me. Not even adults who I loved and adored. There was no filter and it was pretty clear that this is who I was… overweight and different. Those thoughts and words stayed with me as I grew as a teenager – defining and becoming what I thought I was meant to be. The loving, happy on the outside, free and funny overweight girl. Graduating High School at 306 pounds.

That’s right, I was consistently not taking care of myself. I always wanted to be smaller, “skinny”, normal, average, even a little above average would have sufficed. Yet I didn’t know how to get there. I mean, yeah, I tried every diet imaginable. Atkins, weight watchers, cabbage soup, pills, shakes and even worse I went without food… for an hour. I failed at every single diet I tried.

I was 20 when I got married to my husband. Shortly after, we had our first daughter, and during that pregnancy I gained 60 pounds. After my second daughter was born less than 2 years later, I had severe complications healing from the C-section. It took me more than 10 months to heal, and I packed on an additional 20 pounds.

I was extremely depressed. Due to finances, I was forced to find a second shift position to help our family. That’s when it really got bad: nothing was off limits as far as my diet was concerned, and I truly was just functioning mentally and physically. I didn’t care about my body or my health. At 27 years old, I weighed 389 pounds and was slowly killing myself. I was sick all the time, missing work, exhausted and miserable, all while trying to portray the same happy person who had just accepted who I had become. It was a constant mental battle that weighed me down more than the weight I physically carried. I knew that I needed to lose weight. My brain was filled with self-hate, telling me I wasn’t good enough if I didn’t.

I was finally able to quit my second-shift job as my daughters became of elementary school age. I landed a pretty decent job working first shift, with good hours and good pay, and I started to feel “normal’’ again. I was able to spend more time with my family. I was making new friends, and I was starting to gain some self love.

And then a friend of mine mentioned starting the South Beach Diet. We were on a weekend vacation together celebrating St. Patrick’s Day and decided that when we got home we would start. I figured it wouldn’t hurt to try and just maybe I was ready for a big change.

I dedicated myself to two weeks of phase one of the plan. If I could get through the two weeks, I knew I could do it. The first days were terrible; I had the worst carb cravings ever, and I wanted to cave so bad, but I didn’t. When the two weeks were up, I was down 20 pounds, and I knew I wanted to keep this feeling going for life.

As I slowly reintroduced certain grains back into my diet, I noticed the same stomach issues I was having before, along with dreaded carb cravings. I decided to change to clean eating while staying low carb. I released the tight grip of processed foods and made my way to losing 90 pounds in my first year.

Then I was stuck. I couldn’t seem to lose any more weight, and I knew what I needed to do, but all I could think was that I’d never be able to work out. I was still out of breath walking up the stairs and felt gross.

So I made some goals. It was March 2013, and I saw an ad for The Color Run 5K. I had never run a minute in my entire life. I took on the challenge, determined to prove everyone who doubted me wrong. It was scheduled for my 31st birthday, September 7, in beautiful NYC. Now I needed to learn how to run — or even walk — at a faster pace. I downloaded the Couch to 5K app and headed to the dreaded gym.

The first day I could barely run the 60 seconds in the program. It was terrible. I had this running commentary in my mind of what I imagined the people on the machines behind me were thinking. But I was not going to let any of their imaginary negative thoughts be proven right. The 30 minutes went by, and I felt so accomplished. Slowly but surely, I kept going, keeping on track and moving forward. I started falling in love with feeling better, being sore (I actually love the feeling) and wanting to move more. The pounds were starting to come off and with a push from 30 days of Whole 30, I hit 100 pounds lost! 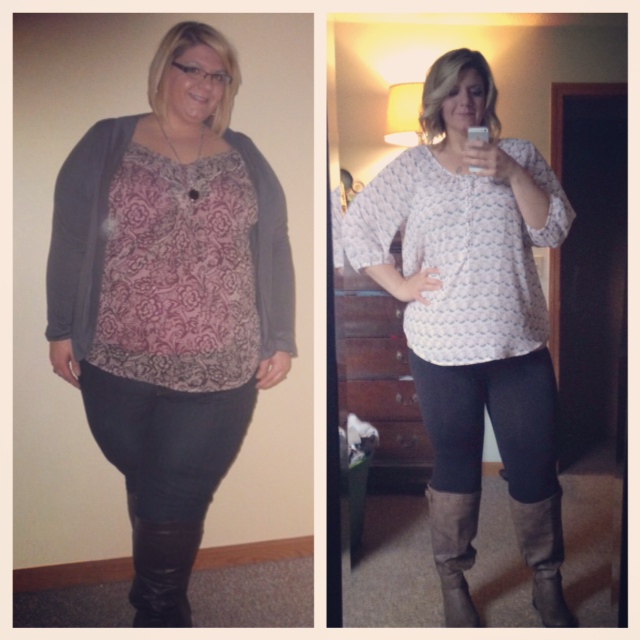 This was when I started thinking about really stepping things up, and during a hair salon visit, I found my answer: I met a personal trainer from a local Cross Fit box. I knew she would be able to help me. I took her number, and a few days later we met and my life changed completely. I was doing exercises I never knew I could do. I was more motivated for a better life to be fit and strong. I wanted a life of fitness, and I was getting there.

I spent the summer training for and completing a 5K Warrior Dash and The Color Run — not your typical lying on the beach, eating ice cream and relaxing kind of summer. I dragged my kids to the gym with me 3 days a week and everyday I ran while they rode their bikes cheering me from behind. I was losing inches like crazy, but my weight was still stagnant. I knew I was building muscle, but I knew I was going to need something more to keep me going.

I signed up for a BeachBody Challenge working through the program T25 with trainer Shaun T and drinking Shakeology. Ten weeks later, I had lost an additional 25 pounds. I cried like I had won a marathon the day I finished that program. I knew this was the beginning of a whole new life.

I wanted everyone I knew to feel what I felt by becoming the healthiest Ive ever been, so I signed up to be a coach. I wanted anyone and everyone who would listen to know that they are worth so much more than what their inner thoughts were telling them. I want to inspire people to desire more for themselves. I want my daughters to know that no matter what they do, as long as they believe in themselves they can accomplish anything. Two things I always battled with — healthy eating and working out — have become two of the things that I am the best at. I am working toward becoming a health coach and a weight-loss specialist. I wake up to daily messages of people changing their lives and wanting my help on my Facebook page – knowing that my path has helped paved the way for others makes me feel that this work in progress is a success. I know now that I wasn’t cursed down a road of obesity, but blessed because now I have the ability to inspire and help change lives. 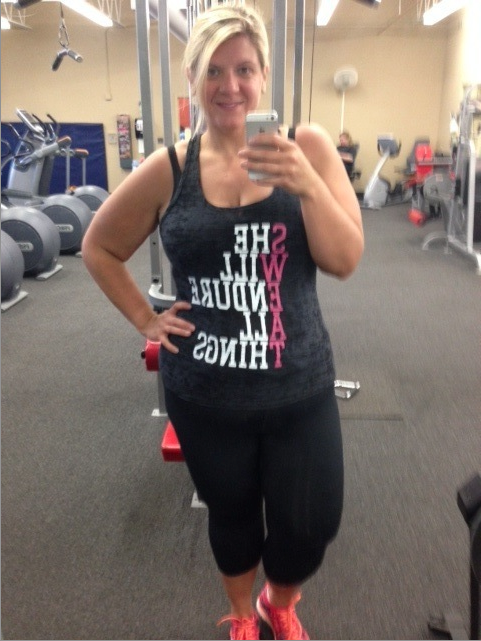 Where am I currently today in my progress? With my incredible personal trainer and Beachbody programs including T25 and 21 Day Fix I lost over 40 inches in my first year of working out as well as an additional 40 pounds. Leading to a total of 140 pounds lost in 2 years.

This has not in anyway been an easy road. I am still battling with losing an additional seriously stubborn 60-80 pounds as well healing the mental process of carrying so much extra skin and learning to live as a person who is healthy in mind and spirit. However, what has changed in me is that I am now consistent on improving my quality of life everyday. I am always striving to be better than I was the day before.

Thats exactly what I tell my clients and anyone who will listen. Its not about who you were yesterday, its about who you want to be today and even better tomorrow.

We can only be the best version of ourselves. I will say that again…

WE CAN ONLY BE THE BEST VERSION OF OURSELVES!!!

Why? Comparison is the thief of joy.

If you are comparing yourself to any of these amazing transformation stories, or the people on the cover of magazines you will never truly find the happiness and confidence to shine as you were intended.

When I am having bad days, I talk and vent about it to my support system. I don’t know where I would be had I not had 100 percent support from them. They who happen to be my incredibly supportive husband (who himself has lost 85 pounds after feeling the fire from my own journey), my children, my parents, my amazing group of girlfriends have all been my backbone. They have all seen me struggle in every avenue in life but saw something more than I knew was there. They saw me as I am today.

So many people have said, “Lauren, I never saw you as someone who weighed almost 400 pounds, I saw you as the woman you are today. Confident, strong, driven and motivating.”. I never knew that I was seen as a person, I only thought I was seen as a number on a scale.

I am so grateful for the life I lead now, the changes I’ve made and the path I am able to follow in helping others all because I decided to not settle into the person I thought I was meant to be, but decided I was in charge of the person I want to be.

You can find Lauren at: