Kurt Weber is a Strength Coach at Cal Fullerton and private trainer, certified by NSCA-CSCS and USAW and is preparing for his first physique competition. You can read more of his posts here or find him at his website.

This past weekend I competed in the NPC Tournament of Champions held in Culver City, CA.  It was the first physique competition I’ve ever done, and the first time I’ve ever had to diet as hard as I did. My nutrition has always been performance-based, so dieting down for show was an all new challenge.  For 6 weeks I prepared every meal, increased my cardio, and trained hard, dropping from an initial 205.4 lbs and 8% body fat, to 194.8 lbs and 5% body fat.

Going in to the competition I didn’t know what to expect.  After seeing yourself in the mirror for so many years, you get a false sense of your true appearance. You have no idea how you stack up against others. There was some good talent on stage, and I didn’t know if I would finish first or even last!

Prejudging went well; the judges pulled me out and shifted me around a couple times, comparing me to the others.  That part was over as fast as it began, and then we had about 4 hours until finals later that evening… definitely a rough 4 hours as I was starving and tired at that point.  I grabbed a few pieces of boiled chicken breast (for the last time!) and relaxed.  During finals we were all brought out on stage again, then the top 5 were called and I was surprised to hear my name.  Looking around I was anxious to just grab my 5th place trophy and head home, but as they called the names out in reverse order, next thing I knew it was me and just one other guy standing there. Then my name was called for 2nd place!

I was really happy with how I did.  Of course I wanted to place high, but at the end of the day I feel like I gave it my best effort throughout the process, and that’s 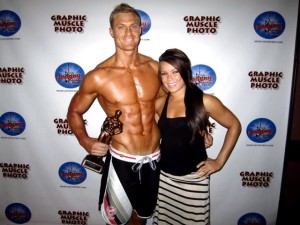 all I could do.  It didn’t matter if I placed first or last, it was the process that made me stronger.  Although I’m not a personal fan of the lifestyle and sacrifices it takes to compete, I do have a lot of respect for those who compete throughout the year.  It takes extreme dedication, both mentally and physically, to adhere to a strict regimen day in and day out, early mornings and late nights, weekends and holidays.

We all face many challenges in life, and I believe that it’s how you respond to those challenges that define who you are.  I have been guilty in the past of becoming too comfortable in my situation, not taking chances, and taking the safe route time and time again.  But recently I’ve come to realize that these habits haven’t got me anywhere in the last few years, and what starts as a habit, can easily turn into a lifestyle of “maintenance.”

To me this competition wasn’t a huge accomplishment in and of itself. It forced me to step outside the box and try something I’ve never done before, however, and hat is infinitely more valuable than a trophy.  I’m fortunate to have been able to share my experience with all of you, and I hope that this may inspire some of you to step outside of your comfort zone as I did, and pursue your own Quest, whatever that may be!