Featured Nutrition
Tweet Share Share Pin It
People who are successful in achieving really low levels of bodyfat usually have to use several different tricks to achieve their goals. Tricks like eating smaller, more frequent meals, or consuming more calories from protein and less from carbohydrate sources, just to name a few.
But one trick that often gets overlooked is using fiber to fool your body into being more satisfied with less calories. Yes, I said it – you can eat FEWER calories and be MORE satisfied. At least for a while. But as you’ll see, a while is all you need. Unless you’re a rat (that’ll make more sense in a second).
There’s an entire school of thought called Volumetrics that states that people tend to eat the same VOLUME of food on a daily basis and not necessarily the same number of calories. Proponents of this approach recommend eating foods that are large in volume but low in calories (like cabbage, lettuce and other veggies) in order to easily reduce caloric consumption while eating quantities of food that are satisfying.
In other words, if you eat an average of X volume of food per day, if you manage to increase the volume of food you’re eating while keeping the calories lower, you’ll feel just as satisfied while eating fewer calories. This, they claim, should allow you let the pounds fall off without any suffering whatsoever.
There’s an entire book written on the concept. Check it out here. 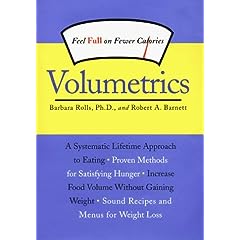