In January 2014, I made a decision that I did not want to turn 25 and still be unhappy with my body. It wasn’t anything to do with confidence, but mainly that I wanted my physical appearance to be congruent with how I was in my professional and personal life. It was also not lost on me that weighing 270 lbs. at 24 was not particularly healthy! I tried several times in the past to lose weight but always failed. I believe this was due to the fact that I wanted to lose weight for the sake of it, without having any personal or clear reasons. This time it was purely because I wanted to take ownership of my health and fitness in the same way. I had taken ownership of the progression of my career and the experiences I was opening myself up to. I wanted to live life without regret and move past the daydreams of what it would be like to be in shape. I wanted that to be a reality. Furthermore, I found myself relishing the challenge and knew how much character it would build in me to see this through once and for all.

I realized that rather than focus on the overall goal of reaching a certain weight, the way I would ensure I didn’t stray from my exercise and diet routine was to make it all about a change in lifestyle. Then it wouldn’t be just about losing weight, but that would be an added bonus of my newfound outlook on life. This also set me up with the mentality of “when I do lose weight, I can’t return to old habits and risk ending up back at square one.” I also wanted to ensure that my target weight loss amount was one of the furthest things from my mind. I knew it was a huge target and one which would make each small amount of weight lost seem insignificant in comparison.

Although my final target weight was never fully in focus, I understood the importance of setting weight and fitness goals to serve as motivation and encouragement during my quest. As my cardio improved, I pushed myself to run further, row harder and venture onto different machines to keep my workouts fresh and fun. Every time I lost 10kgs, I’d celebrate by taking a photo holding a barbell of the same value to serve as a reminder of what I accomplished. If an item of clothing that was once too small suddenly fit, it would be a go-to piece in my wardrobe. This served as a constant reminder of the feeling of accomplishment. 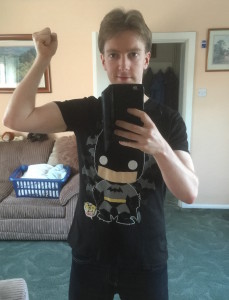 My exercise regimen was very challenging at first since my fitness levels were incredibly low. A five-minute jog would put me on the verge of exhaustion but I knew I had to stick with it. With each session, I knew I was burning the body fat needed to lose the weight. I drove myself on by remembering each time how great it felt to know I pushed through the pain to get a tiny bit more fit. I used the pain and difficulty to motivate me in my diet. Why would I want to ruin the progress made through such discomfort by eating something that could wipe it all away? As I became more accustomed to exercising and my breathing and cardio improved, I incorporated a blend of interval cardio and weights to burn fat as effectively and efficiently as possible. Naturally, the intervals started small and the weights started light, but both allowed for continued progression which served as further motivation.

From a dietary perspective, it frustrated me that doing a search for effective diets for weight loss yielded so many differing and varied results. It made it impossible for a nutritionally clueless person like me to know what was right and wrong. In the end I settled on the mantra, “keep it simple.” I lowered my carb and fat intake and increased my protein consumption. This made my metabolism work for me instead of against me. I cut out junk food and sugar-heavy snacks, which, in the past, had been a huge obstacle. But this time, I knew why I was trying to lose weight, making it far easier to stick to a strict diet. Having said that, being strict doesn’t mean boring! You can still create amazing, healthy dishes without negatively affecting your weight loss goals. Quest Bars were a crucial element of my diet. Since I cut out all sweets, the bars became my treat to look forward to without having to compromise on my diet.

I also became aware very early on that support from those close to me was essential to keep me on track. I hired a personal trainer to guide me in what to do at the gym and ensured he had a no-nonsense approach. Similarly with friends, I made a deliberate decision to distance myself from people who, with all the good will in the world, would not be as unwavering in their support of my diet. I chose very selectively who to lean on during this time, as I knew any mollycoddling and excuses would not help. I was serious about losing weight; I needed those supporting me to be the same.

The aim was to get to my birthday in July weighing 176 lbs. and continue from there. When I got to my birthday I was 169 lbs., meaning a loss of 101 lbs! Naturally I was delighted and even more determined to push forward. I spent the remainder of the year focusing on improving my fitness while still challenging myself to hit new goals. I currently have two major goals: to eliminate the body fat determined to stick around my belly, and work on my muscle mass and definition. As I write this I weigh 147 lbs. My goal (which I have no doubt I will achieve) is to have gone from one end of the physical spectrum to the other. 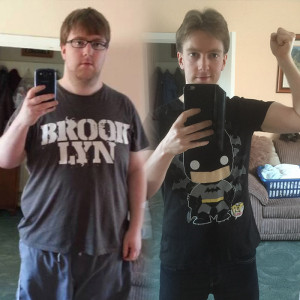 I have so many people I am grateful to for providing me with support, encouragement and advice during my transformation. Quest Nutrition is certainly in that group, not just through the products they provide but the support and know-how they provide. If I were to leave you with 5 tips I’ve found useful along the way they would be: