Never Underestimate the Power of the Pose

I’ve been training for the One-Thousand Club a few years now, but I’d just as much love to be able to do a full split. Giving yoga a weekly slot in my training roster sounded perfect. It looked easy enough, as I’d taken some solo sessions at home 4-5 years ago (courtesy of my favorite 90-min home workout regimen), but I’d never taken an actual class before. If you’re ready to expand your own fitness horizons with yoga, then DON’T just drop in blindly. You will be humbled… and not in the cool, looking-out-into-space kind of way. Here are my 7 best tips for any bodybuilders looking to get their namaste on for the first time:

I assumed a lot of the names and workshops would follow some yuppie, quiche-eating naming convention… so “Haute Bikram Yoga” sounded like it was probably named after the instructor. Well, apparently “haute” is just the hipster way of saying “hot”. Really, REALLY hot! Never chicken out and leave, regardless of which type of class you show up for, but definitely do some research on what exactly you’re getting into. My first experience turned out to be a surprise trip riding inside the furnace of a slow-motion train wreck of joy.

Bring back the 80’s for one night only, because you’re gonna need it! Sweating is inevitable in a sauna when you relax, so add in some hot yoga and it POURS OUT! Especially anyone with longer hair, you’d better wear a headband or you’ll be wiping sweat off your brow for the entire second half of the class.

My first yoga class at the crack of Mt. Doom damn near knocked me out, but it wasn’t enough to overcome the fact that my shoulders were getting destroyed. In the past I’ve admittedly skipped legs for more arms, a day or two before selling tickets to the weekend gunshow, but chiseled pipes don’t matter here. Unless you’re a painter, waiter, or ventriloquist, your arms are probably more relaxed most of the day. But not in yoga! These classes are basically an hour of dumbbell flies, so come in rested and ready. 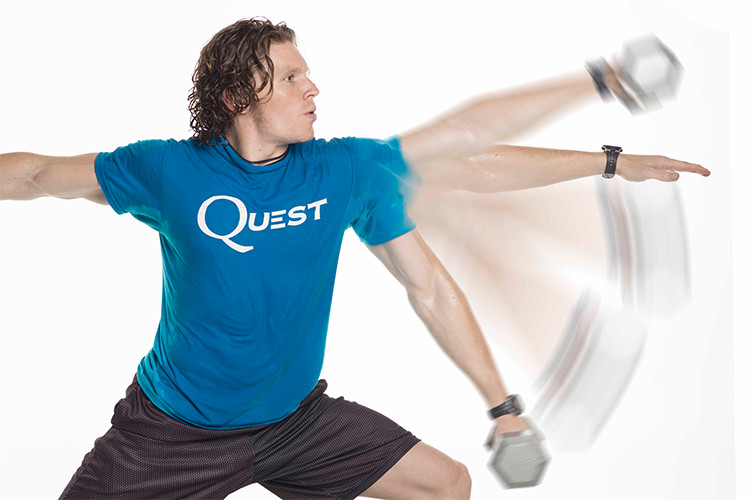 It’s quietly understood that during curls and presses we can cave a bit on form for the last few reps, just to hit and exceed our goals. But since yoga is an isometric practice, not concentric and eccentric, there’s no reason to swing your leg back up if you happen to drop it ten seconds early. Slow and methodical is the name of the game here, not fast and furious. Plus, if you rush the form when your energy is waning, there’s a good chance you’ll fall over onto the person next to you. That’s just embarrassing, especially if you’re with a date. Which actually brings me to a VERY important point…

5 – THIS IS NOT A PLACE FOR EARLY DATES

I’m talking to my mobile-dating friends, here (or any other yoga first-timers). Unless you’re both absolutely as fit as can be, somebody’s going home embarrassed. Are you the asshole who brought his date to a work-out that’s way beyond anything they’re ready for? Well, maybe… if you’re into some type of sadomasochistic exercise torture. But when it’s YOU who falls and can’t get back up, don’t be surprised when your newly kindled flame is immediately blown out. Or you could, CONCEIVABLY, attempt to play the clueless doof card if (when) it happens, and MAYBE you’ll win some adorability points to cash in later… but just like yoga’s own twisting half-moon pose, that’s a high-risk form for failure!

Here’s the good news: in yoga, there’s no hunting for dumbbells, nor a line to wait in for the squat racks. Bad news: there are no real breaks, outside of the ones you grant yourself. Regardless of whether you’re a slow or fast-twitch kind of person, yoga is a beast of its own. All muscles engaged, all the time. No amount of strength or cardio stamina can prepare you; the only way to get better at yoga is a slow, gradual improvement. Hang on tight and push yourself to new limits. Once you hit child’s pose, the finish line is in sight.

About three months ago I dropped into a CrossFit box for the first time. Intense, but I stuck around for the second class, just to say that I did. Winded and worked, but still willing to go on, maybe even ready for a triple-dip. But trying Haute Bikram Yoga… I didn’t even make it through one class! I caved around 90% of the way (okay, 80%… fine, 75%) and had no desire to stick around for a second session. But not from a lack of respect or interest… I was just wiped! This was the most intense thing I’ve ever done. No joke. After giving yourself a week of extra cardio and light stretching (plus a few trips to the sauna, for those attempting haute), I would whole-heartedly encourage you all to do the same. The next day I felt as fluid as a child.

The Cookies & Cream Classic Shake is a hard one to beat, especially when you’re in a hurry. But to be completely honest, I actually fell asleep before even finishing it. I was completely exhausted.