(If you missed Chapter 1, click here and catch up)

Jane closed her eyes and focused on her breathing. If she intended to escape in her current state, she needed to regain composure and wits. It was moments like these that her father trained her for and now more than ever she needed to rely on her instincts. She felt the pressure of the blood flowing in her chest. It pushed on her skin, pulsating enough to lift and lower the thin hospital gown covering her chest. The pounding of her heart slowed as her sense of hearing heightened. The footsteps outside the small chamber ceased. Her pursuers were either standing still waiting for her to move and give away her location, or they were gone altogether. Whatever the case, she had no intention on revealing her hiding spot. There would be a time to panic and allow herself the appropriate emotional response to losing a limb, but now was not that time. The beating bass drum that was her heart now resembled a bongo tapping in perfect rhythm. With control of her adrenaline she focused on the sounds from outside her tight chambers.

The environment around her was cold. When she pressed her ear to the metal surface of her surroundings a chill tingle rippled down her spine. No sound invaded her small chamber, save for the mechanical whirr of what she figured to be the motor of the morgue refrigerator she called home. Still, she waited. Then it came. A pair of boots slowly plodding down a hallway floored with concrete. The owner of the feet tried his best to mask the clomping, but didn’t possess enough wherewithal to avoid an obstacle. His misstep set off a domino effect of sounds, first of the rubber boot making contact with the metal bucket. Then the bucket connecting with the concrete wall. The water sloshing over the side and dousing the concrete floor. And finally the man voicing his idiocy with an the appropriate expletive, “shit!” followed by another man’s retort of an equally apropos “shhhh.” So Jane knew there were at least two men. And not men of the hospital staff as people at work seldom try to mask their footsteps. Whoever was out there was looking for her.

Shut up, don’t cry out. You have to stay quiet! Her brain screamed to her, but her silent screams were soon amplified and made real.

Enough time had passed for Jane’s eyes to adjust to her lightless surroundings. Her pupils were fully dilated and suggestions of shapes populated her field of view. Directly above her the surface was a metallic and reflective metal, smooth as glass. She spied a latch at her feet. I’m too exposed if someone opens the door. I need to turn myself around. She thought to herself. With only one arm, though, she didn’t know how effective any of her aikido training would be. She did know now was not the time to doubt herself.

None of that mattered because the first effort Jane made to move her body was met with painful disagreement from her muscles. Her body reminded her of its recent trip through a windshield as signals of agony shot through her nerves. Whatever form of painkiller was in her IV drip was now fully flushed from her system thanks to her recent pulse of adrenaline. Shut up, don’t cry out. You have to stay quiet! Her brain screamed to her, but her silent screams were soon amplified and made real. A moan of pain filled the chamber and surrounding areas. The footsteps outside stopped. Jane tried to physically cover her mouth, but only one hand connected with her lips. The stump of her left forearm missed her face and slammed into the metal surface beneath her. The echo it created reverberated through the room like a ripple in a still lake. Jane’s hiding spot would soon be her tomb. 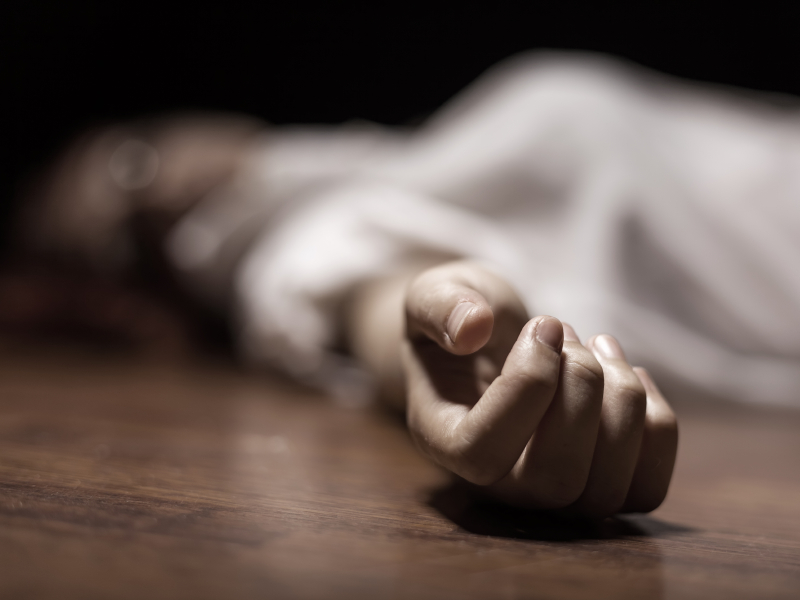 The two men no longer made any attempt to hide their location. Their footfalls were hard and filled with intent. They were bearing down on her location. It was only a matter of seconds until the door would swing open, serving her to them on a platter. “Come and get me you sons of bitches.” She whispered to herself. She gripped the rim of the metal slab for leverage. The first human part through that door would regret reaching in. Seconds ticked by with no activity.
“Jane?” a man’s voice outside the refrigerator called.

The sound was so unexpected that she jumped. How the hell did everyone know her name and more importantly, why were they looking for her? Fluorescent light invaded her small chamber and Jane flailed like it was her last line of defense. For all she knew it was. A hand grabbed her leg, but its touch wasn’t firm, it was soft and delicate. Her muscles involuntarily relaxed as the man slid out the human-sized tray. She squinted in the light to make out his face.

Dark green eyes met her deep blues. They were filled with concern and nestled between two strong sets of crow’s feet. The man’s face was kind, but grizzled. Heavy lines carved into his cheeks, giving his face the appearance of a military man – weighted with the burden of a lifetime fraught with difficult decisions. A two-day growth of black and grey stubble peppered his strong jaw. She now recognized him as the man who wheeled her out of the recovery room. Jane’s realization was interrupted by his voice.

“I can’t believe it worked!” He laughed as he spoke. The man noticed the wrapped bandage covering where her arm used to exist and his smile quickly faded. “Holy shit, what happened?”

She could feel the stubble from his face scratch through the thin layer of her hospital gown. She didn’t mind.

“What the hell is going on over there? Grab her and let’s get the hell out of here!” The second man spoke from his watch at the doorway. He was slightly round in the belly, thickly bearded and wore an eye patch. If he donned a sailor’s hat and completed his sentences with an “arrrgh” Jane thought he’d be right at home on a pirate ship. It was the first time she felt the urge to smile in days.

“We’ll take care of that. He’s right, we don’t have time for this. We need to get you out of here. The Architects can’t be far behind.” He lifted her aching body and she cried out again.

“Enough of this shit, Garret. Just grab her and let’s go!” The angry man spat after he finished his words.

“What’s wrong with him? Is he afraid to die or something?” Jane asked with a smirk. Newfound strength surged through her body as she helped bring herself to her feet. She slung her stumped arm around Garret’s shoulder. She could feel the stubble from his face scratch through the thin layer of her hospital gown. She didn’t mind. Blood painfully rushed to her legs filling them with the pins and needles of life.

“See, I told you you’d like her, Wyatt.” Garret quipped to his gruff companion. “He’s right, though. We have to move.” He looked to Jane.

“I’m fine, let’s go.” She said with unwavering resolve. Her voice betrayed her body. The pain was excruciating, but she fought through it.

Garret met him at the doorway.

The group made their way through the dimly lit corridors of the hospital basement. First a left turn down a long hallway lined with cleaning supplies and discarded gurneys then a right through an unmarked door. They were greeted by another nondescript hallway with a bright green “Exit” sign acting as their destination marker. 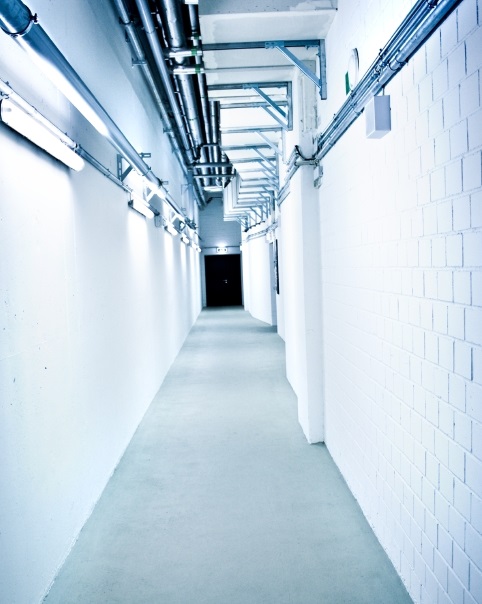 “Not much farther,” Garret whispered to his companions.

“That is if they don’t have the exit completely surrounded,” Wyatt chimed in.

“Who are ‘they’?” Jane finally asked.

“They’re going to kill us if they see us, that’s all you need to know right now. Let us do our jobs and get you out of here. Then you’ll have your answers.” Garret snapped.

Jane was frustrated, but ultimately agreed. She had no clue what was happening, but she finally felt a sense of normalcy in the company of others…even if their company was less than pleasant. The exit was no more than 30 feet away and she could feel her breathing ease with each step. She kept vigilant watch on the party’s rear flank to make sure no one was following them.

Wyatt stopped, pressing his body against the wall. Jane saw another hallway running perpendicular to the one they occupied. The eye-patched man peered around the corner and was back in a fraction of a second. His constant look of anger gave way to one of terror. They weren’t alone down here — “The Architects” were around the next corner. Before Wyatt could utter a word a hail of gunfire screamed and bit into the wall inches away from their location. The cramped hallway erupted in a volcano of dust and debris. Jane could feel the force of the bullets passing her by and the sting from tiny flecks of heated concrete and drywall impacting her bare skin. The group was blind, deaf and had to act fast.

A) Jane reacted the only way she knew how. She tightened her grip around Garret’s neck and with all the force she could muster, dove headfirst through the destructive force of the bullets and detritus. The exit was too close to give up now.

B) Jane knew the path ahead was certain death, she remembered seeing a door ten feet behind them. Not knowing where it lead, she tightened her grip around Garret’s neck and spun him around to double back. Her stump screamed out in disagreement. She couldn’t tell if Wyatt was behind them, but there was no time to look back. She forced Garret through the door and listened as the gunshots quieted behind them.