My name is Brianne Connor and I am 23 years old from Massachusetts. For 22 years of my life, I was highly addicted to fattening foods. I have been overweight since i was a little kid. Even though I was extremely active in many sports I always seemed to keep gaining weight. Exercise wasn’t the problem while I was growing up, it was the nutrition. I loved fruits and vegetables, however I also loved cake, ice cream, and junk food. I always thought that being overweight was something to do with genes and it was in my genetics to be fat. As the years went on I just kept gaining more and more weight. In high school I weighed over 200 pounds and was already a size 18/20. I had plenty of friends and was always a happy person. I was comfortable at the weight I was because my friends and family accepted me for me. 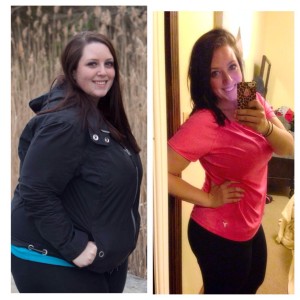 In 2008 I entered Salem State University as a freshman studying Photography. Even though I hated getting my picture taken, I loved finding beauty within others. I also had the control of the delete button on my camera if someone snapped a shot of me. Even though I knew I was overweight seeing myself in a photograph just made everything so real. I flip flopped through plenty of diets while in college but none of them ever stuck. I met my current boyfriend right before entering my last year of college. I got really comfortable with him and together we gained 20+ pounds in a year. As a senior I was overloaded with final projects and tests, my stress level was high and my money was low. I found comfort in fast food not only because it was convenient but because it was cheap. This is when I started to notice my weight getting higher real quick. For most of high school and college I always fit into a size 20 in Old Navy jeans. Size 20 was the highest they sold in stores. It was then when I realized my weight had gotten out of control because I could no longer fit into my size 20 jeans and had to buy a size 22/24. From 2011 to 2012 I had gained 25 pounds.

After graduating college I continued to eat horribly. I ate cookies, potato chips, and ice cream every day. I had a set day where I would go get McDonald’s for lunch. I laughed when someone would mention exercise. I worked 40 hours a week and would make any excuse to not to work out or eat healthy. In December 2012 I went for a yearly doctors appointment.  I stepped on the scale and was in complete shock. I saw that my weight was close to 270. I was disgusted and upset at myself for letting myself get to this weight. The last time I had weighed myself was in 2011 and then I weighed 240. Then after getting weighed the nurse went to take my blood pressure and my arm was too big for the cuff that she had to get a bigger one. I was embarrassed and upset. Thoughts were running wild in my head. “How could I have let myself get this way”. Of course the doctor gave me the yearly speech that I should really exercise and eat a little better. I gave her the speech about how I am so tired after work and I have no time. I was constantly making excuses for myself. It was that day that really changed my perspective on my health. I was obese and unhealthy. I thought about all of the problems my family have with their health. Heart disease and high blood pressure run high in my family. I thought that if there was anything I could do to lower the risk of having these problems when I get older than I needed to make those changes. I didn’t want to take the amount of medication that my parents take every day. I went home that day after the doctor’s appointment and told my boyfriend what I wanted to do to make changes. He was willing to do it with me since he was also discouraged about gaining some weight back after losing 80+ pounds prior to being in a relationship with me. As cliche as it always is, I decided to make my New Year’s Resolution to lose 60 pounds in a year. 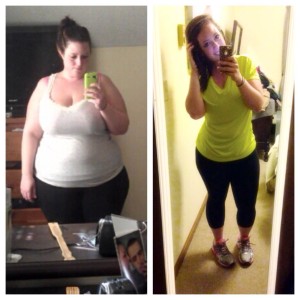 My boyfriend and I when through our cabinets and refrigerator throwing out all of the junk food we could find. We threw out 2 garbage bags of junk out of our house. We later stocked our house with fruits, vegetables, and better options of the foods we liked. I started real slow, I didn’t just jump into a crazy meal plan or exercise routine. In the beginning, I started taking out snack foods from my lunch and instead would eat a sandwich with a yogurt or banana/fruit. I ate Special K cereal or oatmeal for breakfast. I stopped all fast food and soda (which I can proudly say I still have not had in over a year and half). I took out all sweetened, sugary drinks and only drank water and tea. I also stopped drinking coffee for a year because of all the sugar and cream but now i drink it black. I gradually cut out carbs and began meal prepping with grilled chicken and salads. For dinners I would eat a meat with a steamable veggie or salad. I never held myself from a cheat meal if i wanted it. However I was always aware of what I am eating and only allow so much of it into my lifestyle. You have to allow yourself some foods that you like once in a while or else you are more likely to resort back to your unhealthy eating. I would be lying if I said it wasn’t hard at first. It eventually just becomes a lifestyle change not a diet. I also did not jump into a crazy exercise routine where I would go for hours on end. I started slow. I went on the elliptical or treadmill for 30-45 mins for 3-4 days a week or whatever I could handle. I worked my way up to a routine. I began going for 5-6 times a week for an hour each day. I made a schedule for myself where I would take Wednesdays and Sundays off. It was nice having a scheduled routine, I knew when I would have a day off and I would make plans around my schedule. Most of all my weight loss has been through cardio with little weight training. I am now incorporating more weight and strength training into my life. My meal plan and exercise routine are constantly changing. Now i eat mostly high protein, very low carb and minimal salts and sugars. Everything I eat is relatively inexpensive and easy to make.

For breakfast now I drink a GNC lean protein shake or eat a Quest Bar. Quest bars also make great snack foods and always take away my cravings for chocolate. They are an healthier option and are so good! My lunches consist of a salad with broccoli, mushrooms, tomatoes, and cucumbers with my homemade olive oil and red wine vinegar for dressing. Some foods I have found that are better options to foods I like are black beans instead of baked beans, butternut squash french fries, and english muffin pizzas. All are low calorie and yet taste as good as the real foods. When i started, I searched the internet for tons of healthier options. You don’t have to completely throw everything you like out the door but instead find a way to make what you like healthier. 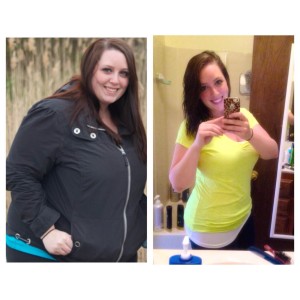 Within the first 9 months I had lost a total of 50 pounds. I was beyond proud of myself and happy with my new lifestyle. My family and friends were nothing but supportive. It was then when I made my fitness Instagram account. I was happy to share my story with others. I couldn’t believe the amount of support I was getting from everyone. It only made me want to work harder. In October I signed up for my first 5k to be on Thanksgiving. I downloaded the Couch to 5k app and began training. For 6 weeks I ran 3 days a week. At first it was tiring and hard but once I started to build up my endurance I started to be able to run longer distances without stopping. Running has always been something I’ve wanted to be able to do. Having the capability to run in a blessing. On Thanksgiving of last year I ran my first 5k without stopping. I had the support of my family and boyfriend there to root me on. By the end of the year I had lost a total of 75 pounds. In the last few months I’ve been working hard in achieving my goals. I am now 92 pounds down and only 8 pounds away from my next goal of hitting the big 100 pounds down. After that i plan on losing another 20-30 pounds. I have dropped a total of 5/6 pants sizes and 2/3 shirt sizes.

If there are a few words that I could tell someone starting this journey, it would be to stay consistent. Consistency within your diet is what will make or break your weight loss journey. Also, If you have a bad day or week do not stress it and keep your goals in mind. Just pick yourself up and start fresh. I have had plenty of days or weeks where I know I could have done better but I never let it get the best of me. I have always kept my nutrition on the right path. We still do not buy junk food from the grocery store and we rarely eat out. I buy food for the week that I know is good for me. I could never go back to what I was eating before. I always get asked “How do you keep motivated”. I keep motivated because I know that I am capable of reaching all of the goals I make. I have gone above and beyond what I thought I was capable of handling. When you have reached the point of no further and begin putting yourself before anything else, you will be surprised with what you can accomplish. Whether you think so or not there are thousands of people who are rooting for you to succeed. Weight loss is something only YOU can control. Determination and motivation can go a long way when you are willing to change. 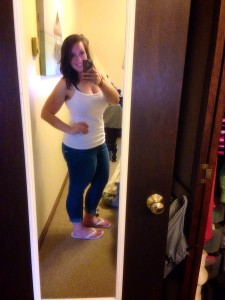 You can find Brianne at: