I think there are a bunch of misconceptions about me, and especially about in music in general. For instance, on ‘The Voice’ I think I was seen more as a contestant than as a singer, and a lot of people don’t realize that I’ve been doing this for a very long time. I was recently connected with a 16-year-old girl who wanted to talk to me about ‘The Voice’ and it seemed she had a very large misconception about the reality of the show. She asked, “How was it to go to instant fame from ‘The Voice’ and get so much attention and get 200,000 followers on your Facebook? I really want to do that!” I had to tell her that it wasn’t overnight success, and that’s the thing I don’t think people realize. So many people go on ‘The Voice’ hoping for a quick payout, but when I went on ‘The Voice’ I already had 5 albums out with my old band, Meg & Dia.

When I got on ‘The Voice,’ I had already performed in every single state in America, except Hawaii, so it’s strange when these younger girls come up to me and are like, “How was it to just step out on a TV show and start on YouTube?” What most people don’t know is that when I was 15, I had a goal of loading up the van and going on tour. And when I was 17, I actually did that with my sister. We packed up our gear, booked shows on MySpace and went around the West Coast doing our own tour, playing for anyone.

“Music is in a really interesting place right now, and not in a good way. You’re either really broke in the music industry or you’re Justin Bieber and you’re doing great. People in the middle are struggling.”

Another misconception in music is money. People think that since I’ve been on MTV and ‘The Voice’ and opened up for James Blunt and Blake Shelton that I’m living in this dream land, but I just got a job as a waitress about two weeks ago –  literally just for money. Every time the end of the month comes I think to myself  ‘holy shit, I can’t pay my rent right now.’ So I got on Craigslist, booked a job as a waitress and I thought I could fly under the radar. But in just the first few days I think maybe 20 people came up to me in my seven-hour shift and said things like, “You were on ‘The Voice!’” or “We saw you with Meg & Dia,” and always, right after they say that, there’s this shock of me being like, “Cool! Thank you! Do you want fries or salad on the side with that?” I read on a website once that I was worth $1.3 million and it was really bizarre.  So I think that’s another misconception in music – Unless you’re a Taylor Swift or Rihanna, everyone else is struggling to make ends meet. And most of the money you make in music now is really through syncs, like getting a song in a TV show or commercial. Lots of people think you make money from touring and that’s not always the case. Touring is actually really, really expensive. The last show I played, I lost $600 and that was a sold out show, so it’s one of those misconceptions again. Music is in a really interesting place right now, and not in a good way. You’re either really broke in the music industry or you’re Justin Bieber and you’re doing great. People in the middle are struggling.

I used to feel like I was forced to compromise a lot when I was younger, but now, honestly, not at all, and it’s just because of my new mentality. The other day I was asked to be in a writing session for a commercial and I thought, I really don’t want to do that. Then my manager brought up a good point: “Weren’t you just complaining about doing dishes last night until 11 at the restaurant that you work at? You want to keep doing that?” I said, “No, what time do you need me to be there at the studio?” I would way rather be writing the song than cleaning up the spills, so it’s actually made me more appreciative of the jobs that I can get in music.

“Archis, for me, is like a piece of art with one person. There’s not a million people involved. It’s kind of old school in that sense.”

When I work as songwriter for other artists, I like writing when I’m inspired by them. I really liked working on the songs that HAIM ended up cutting for the Insurgent soundtrack. I got to work with Anthony from M83 and Joe Trapanese, an incredible composer, and there’s some amazing experiences like that. Lindsey Stirling was also somebody that I really looked up to. She’s a very inspirational, ambitious person and a really hard worker, so I respected her a lot and that was another project I enjoyed working on. Then there are other times when someone asks for a “song for this punk rock band about summertime.” But like I said, with being a waitress now I definitely have a more positive outlook on it. Even though that’s not my wheelhouse, it’s like, yes, let’s write a summertime punk song and let’s make it the best damn summertime song there’s ever been!

For my own music, I now have my band Archis, which is myself and a producer. The EP was myself and Joseph Trapanese. He scored Straight Outta Compton recently and Oblivion and has done some amazing movies. Unfortunately he wasn’t able to do this full-length album with me because he’s signed on for the Insurgent series. But Archis, for me, is like a piece of art with one person. There’s not a million people involved like with my time after ‘The Voice.’ It’s kind of old school in that sense. When I did Red for Dia Frampton, my solo album after ‘The Voice,’ there were about 20 different producers on a total of 12 tracks for the record and so many different writers, so the album is kind of this scatterbrained piece. I’m only working with Dan Heath this time on the new Archis album and he’s done some pretty incredible stuff, too. Dan’s done a lot of trailer music and worked a bunch with Lana Del Rey, including the song “Big Eyes” from the Big Eyes soundtrack. So this time around Archis is just myself with Dan Heath, and I’d definitely like to keep it with Dan and Joe if I do put out a third album. 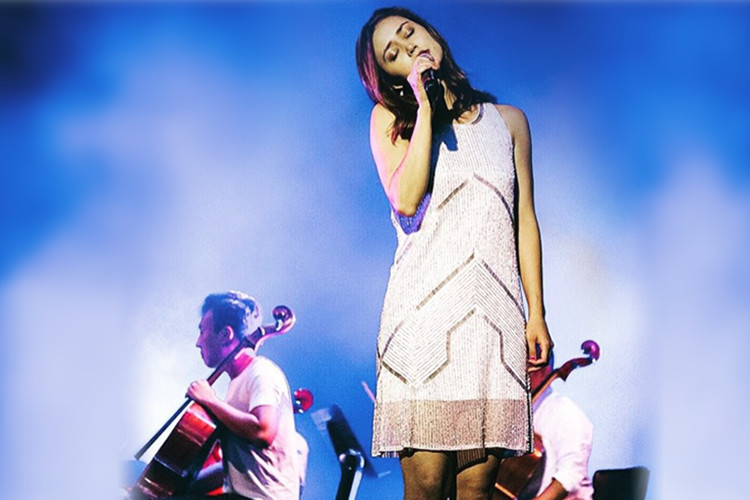 With the creation of Archis, I’m taking charge of my own destiny. It’s kind of a weird thing to say, but if I had been Taylor Swift for the last 10 years and had built up this iconic pop princess amazing thing (I’m actually a big fan of Taylor Swift, by the way) and then put out this weird indie album (I mean, it’d probably do well anyway because it’s Taylor Swift), I’d probably be letting down a lot of people who want that pop sound. For me right now, I have a decent platform but I don’t feel like I’m going to let down too many people. I just want to do what I want and if somebody likes it, that’s great. And if they don’t, that’s fine. But there’s really no pressure to be anything other than what I want to be anymore.

On ‘The Voice’ I did a cover of Kanye West’s “Heartless” and I think there were like a million downloads of that song when it went up on iTunes —  I think the last Archis EP sold about 5,000 copies the first week, which is great, but it’s not comparative. Lots of people follow me on Twitter and Instagram and I’m constantly talking about Archis, but sometimes it’s hard for people to put it together and realize what exactly I’m doing.

My personal mission in life is to just express myself as much as possible and make every day not a boring day.

Archis is kind of a story-telling project for me and I hope that it can elevate people’s lives in some way. Sometimes it really just means a lot to me if they say they took a long distance drive and turned the record on and they enjoyed it and it made their drive better. I want to enrich people’s lives in the smallest way or the biggest way. The new record should be done in May. It’s about transitioning from darkness into light and, lyrically, it’s very somber. I’ve always been a little bit darker, but I think this time around I’m really not trying to cover anything up. Archis is just about having hope in those kind of dark places. If I could sum up a motto for my life, something I could print on a t-shirt, it would be two words: Keep going!

My personal mission in life is to just express myself as much as possible and make every day not a boring day. I think to be boring is really sad; to be boring, or to be bored. And usually, if you’re bored, you’re boring. If I haven’t seen somebody in a couple weeks and I run into them at a restaurant and they ask, “What’s been going on?” I never want to say, “Oh, you know, not much. Just kind of been working and taking my dog on walks.” I hope I make every day pop as much as possible, because I think life is really amazing.

Success for Archis, to me, is to be able to go play in Australia and play in China and play in New Zealand and have there be a decent amount of people to the point where I can support myself and be a touring musician. Because honestly, I love touring more than anything. I love playing in front of people. I love looking out to the audience and seeing someone singing lyrics that I wrote in my bedroom and we’re connecting together. It’s a surreal feeling that you really can’t get anywhere else. You can’t get that from posting a YouTube cover.