Every month we receive so many inspiring transformation stories from hardworking dedicated people who have taken control of their fitness and nutrition. These are folks who are dedicated to making a change in their life – more often than not we feature someone who lost an incredible amount of weight by owning their fitness and nutrition routines. This month I wanted to break the mold and feature a story that literally made me do a double-take when I saw his before and after pictures. As you can see above, then-17-year-old Eric Kardaras went from being a gifted 120-pound distance runner to a well-sculpted 170 pound chiseled monument to fitness. I’m reminded of the same kind of dedication seen by Maureen McCarthy and her 110+ pound weight loss at the age of 65. If Maureen and Eric have one thing in common, it’s that there’s no ideal age to change your life. The opportunities are there if you know where to look. In the case of Eric Kardaras (now 18 and graduated from high school), it was his compulsive need to learn Clash of Clans strategies that started him on his quest to transform his body. 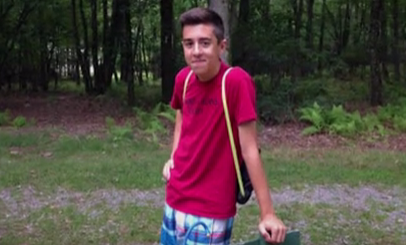 “When I started I thought, I can’t do the bench press, I don’t look like those guys. I was clueless.

“I was heavily addicted to gaming. I honestly spent a lot of money and time on Clash of Clans. Looking back, I really regret it. I was so bad that I’d leave my iPad on and just tap the screen so no one could attack my clan. It would consume my life. But one day when I was watching a Clash of Clans strategy video one of the recommended videos was Max Chewning’s 10,000 Calorie Challenge was one of the videos that came up. I clicked on his channel and he’s deadlifting 500 pounds and I was thinking, why can’t I do that too?” Eric explains in a voice that’s much deeper than I anticipated. As a gamer and former Clash of Clans player, I know exactly what he’s talking about when he mentions how it would consume his life. More often than not I would be chastised by friends and my girlfriend for “getting in a clan battle” while socializing or sitting down to watch a movie. 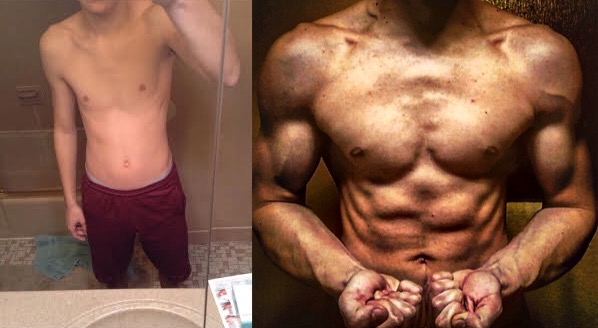 A little background info on Eric: He wasn’t teased or influenced by outside circumstances to add mass to his tiny frame – he did it because he’s dedicated and had an open mind – but not at first, “When I started I thought, I can’t do the bench press, I don’t look like those guys. I was clueless. I never thought I was able to be a bodybuilder, so I took it upon myself to watch a bunch of videos for hours. I stayed up really late educating myself.” As we all know, watching a bunch of YouTube videos doesn’t equal expertise at anything except hogging up bandwidth in the house, but that didn’t deter Eric from diving in headfirst – even if he looked a bit silly doing it, “I had a couple twenty pound dumbbells and ten pound dumbbells and a makeshift bench in my basement. For the first three months I was honestly too scared to sign up for a gym. I thought people would judge me.  But I still wanted to just get going and do something. So I did the same workout routine every single day. I think it was some dumbbell presses and curls every single day with some pushups. I don’t know how because I was doing the same routine every day, but I actually saw a lot of progress.” At this point he chuckles at his relative ignorance, but there’s also a sense of raw pride that comes through in his voice. I’m reminded of his age when he informs me that another reason he wanted to gain mass was when he compared the size of his arms to a group of female friends and realized there wasn’t much of a difference. Immediately I was transported to that beach and my out-of-shape, t-shirt-at-the-beach high school self was right here with him.

Honestly I didn’t know that I would fall in love with a healthy lifestyle and weightlifting as much as I have. It’s done things for me that I wouldn’t have imagined.

According to Eric, undergoing a transformation is 33% willpower, 33% body conditioning and 33% nutrition, “I started to eat more, too. At the time I was eating very, very badly. I worked at a movie theater so my diet consisted of fried mozzarella sticks, chicken and popcorn — it was awful so I cleaned up my diet and started eating more quality foods.” He mentions that he discovered Quest and fell in love with the Chocolate Chip Cookie Dough Quest Bar (like we all have at one point). After three months of working out in his basement he worked up the courage to join his local YMCA. This was a huge deal for Eric as the kids with athletic physiques from his school would go there to play basketball. Then something amazing happened…absolutely nothing. No one made fun of him and he conquered his fear of being judged – a large part of this, he said, came from the fact that the majority of the people in the “Y” were “older.”  This is one of the only times I’m reminded that I’m speaking to an 18-year-old, it’s not even an insensitive comment, but there comes a certain age where you stop referring to anyone over 40 as old, and that age is 30 (A club of which I’m a member). He jokes with me about how he’d get glares and looks if he’d drop the weights or grunt through a final rep. I start laughing as he explains how “Relentless” the elderly members of the gym are “if you step away from a machine for a second, they jump right in there. They don’t care.” We’re full-on laughing at this point. We compose ourselves and he continues. 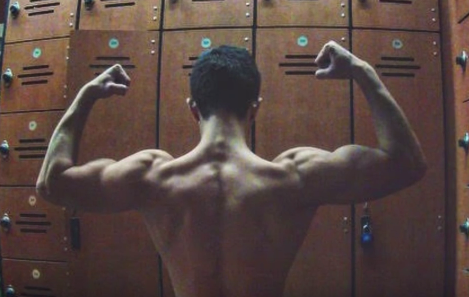 “Honestly I didn’t know that I would fall in love with a healthy lifestyle and weightlifting as much as I have. It’s done things for me that I wouldn’t have imagined. My self-confidence has been boosted immensely, I look better, I feel better and I’m able to help my friends out.” He tells me about a friend who has high cholesterol in high school who he’s currently helping plan out a healthier diet. And this doesn’t seem to be a temporary situation for Eric – in fact he was accepted to Rutgers University to major in Exercise Science, “Fitness and exercise and wellness in general is something I’m much more passionate about now. Under exercise science there’s a sports management route you can take, or be a coach or a gym teacher, but there’s also a sciencey route that I’m taking where you can be a physical therapist or personal trainer.” His tone changes as he talks about his grandmother, it’s a sore spot, I can tell, “My grandma’s getting older now and she’s dealing with weight issues – she’s had to have her knees replaced and she’s having heart problems as well.” He pauses, “It’s a big problem in our country.” I don’t push him further on the subject, I’m convinced – this kid has his shit together and I’m insanely jealous of his youth.

As our call came to a close I had to ask Eric what he’s learned and what he hopes to impart on the people in his life (and you reading this – if you’re open enough to take advice from a high school graduate), “Honestly, the thing that I’ve come to realize is that you have to stop caring what other people think of you. That’s what held me back and that’s what holds a lot of people back. I see it in my school every day. People will congratulate me on my hard work but then say they’re too fat or too skinny or too embarrassed to do the same thing. I say the same thing to every one of them you just need to start!” His follow-up rocks me to my core, “It’s your life and if you’re always living it thinking about other peoples’ views of you you’re never going to be happy.” Even with his renewed optimism, Eric doesn’t deny there are detractors out there, “A lot of people hate on me and think I changed overnight. But they don’t see me prepping my meals the night before or waking up early or hitting the gym at 8pm after a long day. They don’t remember when I first started out and when I sucked.” And that’s the main thrust of Eric’s drive – you’re going to suck at anything you try for the first time and that’s okay. New situations can be scary and intimidating, but if you’re motivated by fear to stay the same, you’ll never test your limits and know what you’re capable of.

All I can think about after we hang up is how I wish I had that amount of insight at his age – I have hope that Eric is the rule, not the exception.

You can see Eric’s own transformation video below: