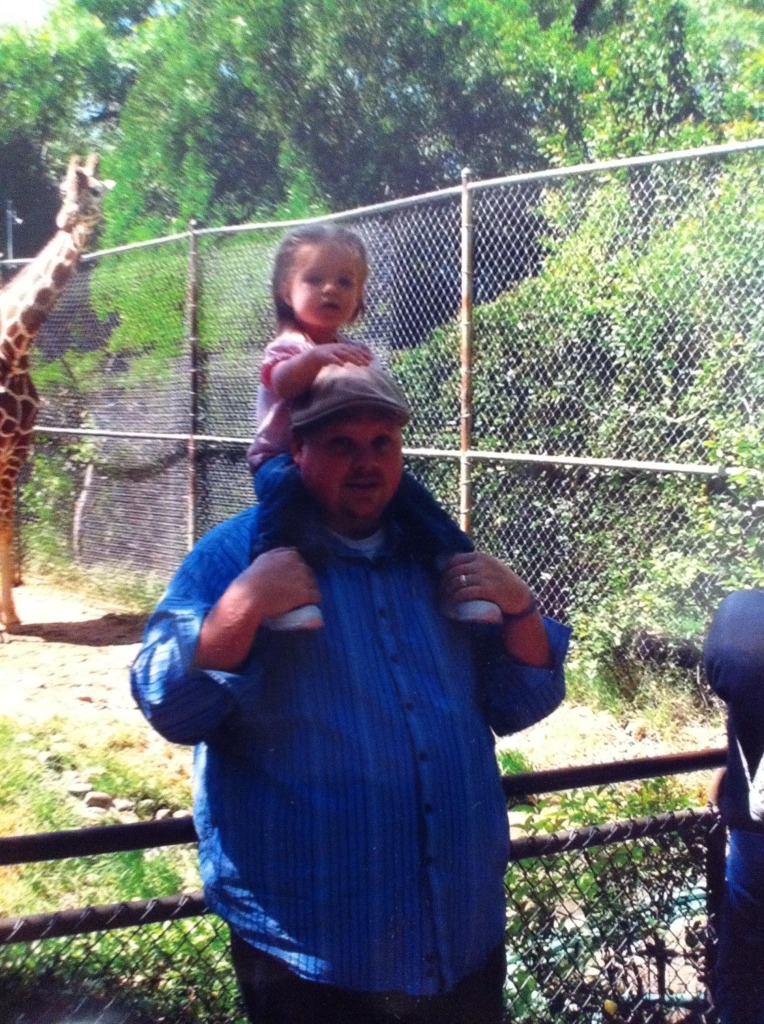 At the age of 26, weighing in at 425 lbs my first daughter was born June 30th, 2005. Avery Isabel Hoyer. What an eye opening experience to have a child. For the first time, someone else mattered more than myself – and she was it. The sad bit was that it wasn’t quite enough to put me over the edge towards better health and fitness.

Later that year, my boss and I went to a 49ers game on Thanksgiving, and upon my arrival to work on Monday, I found out he had passed away over the weekend from unknown causes. This hit home hard – I was scared I was going to die because of my weight, but still not enough to make me change. 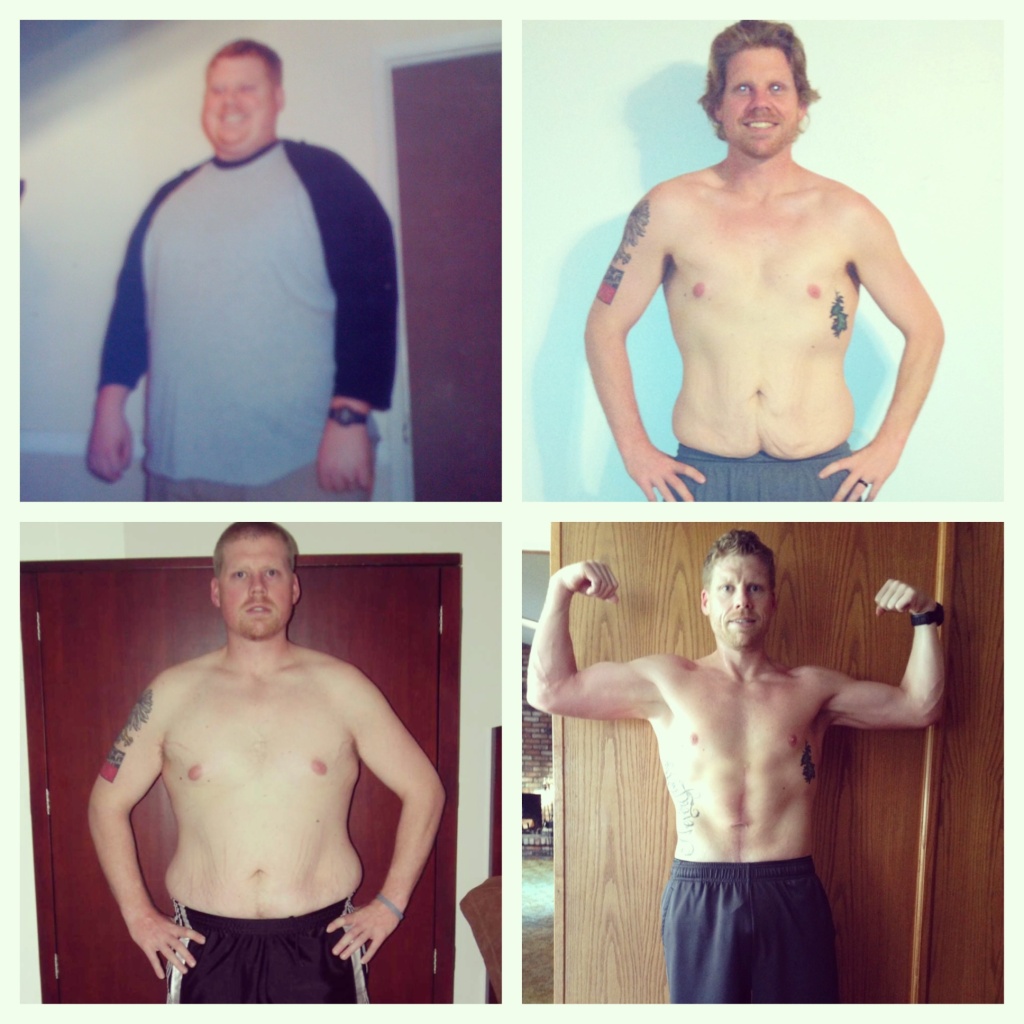 Next, I found out that a friend of mine was having gastric bypass surgery. Him being the one friend who was bigger than me was always my security blanket that allowed my mind to think my weight issues were ok. I finally decided that enough was enough and I had to do something about my obesity issue. In the last days of November, I marched myself into a gym, signed myself up and said I’m in…but not till January 1st. Its never just that easy, right?

From day 1, I had no support system, it was just me. No trainer, no nutritionist, no gym buddy, no nothing. Just me and my will to not be the fattest guy in the group, and to not be an embarrassment to my daughter, as well as be able to watch her grow up. So here we were, January 1st 2006, and I walk in the gym. I’m fat, have no clue what to do, and everyone is looking at me. 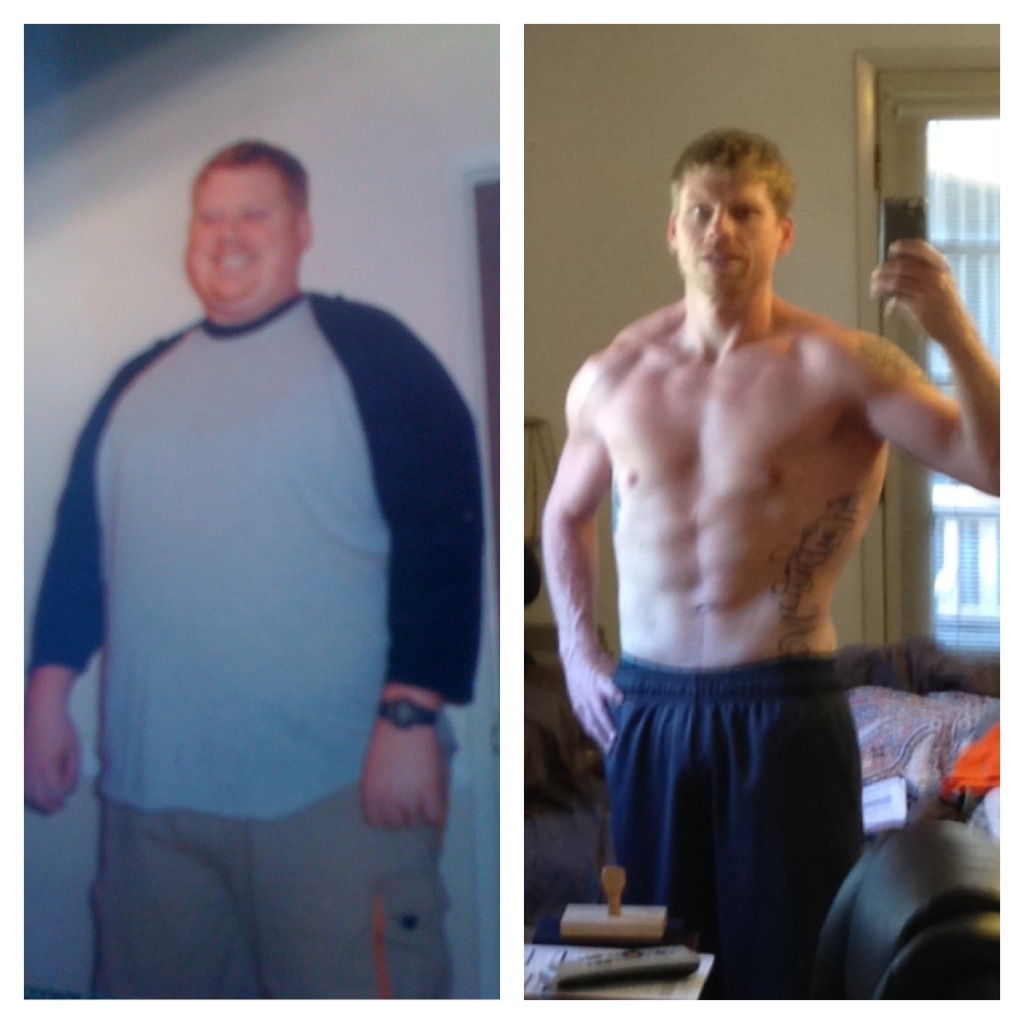 I had two choices; I could walk out and continue life as it was (which was miserable) or step forward and take a step towards a better future. So I decided to take the step forward. All I knew was that a raised heart rate for long stretches of time and sweat helped burn calories – and my goal was to burn as many as possible. So I figured I’d do the machine that looked like the least bit of effort (but with the most output) – an elliptical. 15 minutes go by, and I’m drenched in sweat, my heart is pounding and I can’t take any more. I’m done for the day.

My diet also became a 1200 calorie-a-day diet as of January 1st as well. It was compiled of Smart Ones, Clif Bars, and Salads. I did this for months. Every day, the same routine, eat, work, eat, elliptical, eat, sleep. From day 1 on the elliptical – where 15 minutes was all I could do, to 6 months later – where I could do up to 60 minutes. The weight was pouring off of me, my energy levels were up, and I was super motivated to keep going. I started to get encouragement from the gym employees because I was becoming a regular. I never missed a day, same time same machine, every day. For over a year this went on and I lost over 100 lbs the first year. People were now talking about me again, but instead about how large I was, it was about how quickly I was shrinking. Finally I was starting to feel a little better about myself. I was no where near where I wanted to be, nor was I anywhere near healthy yet… but I was sure on my way. 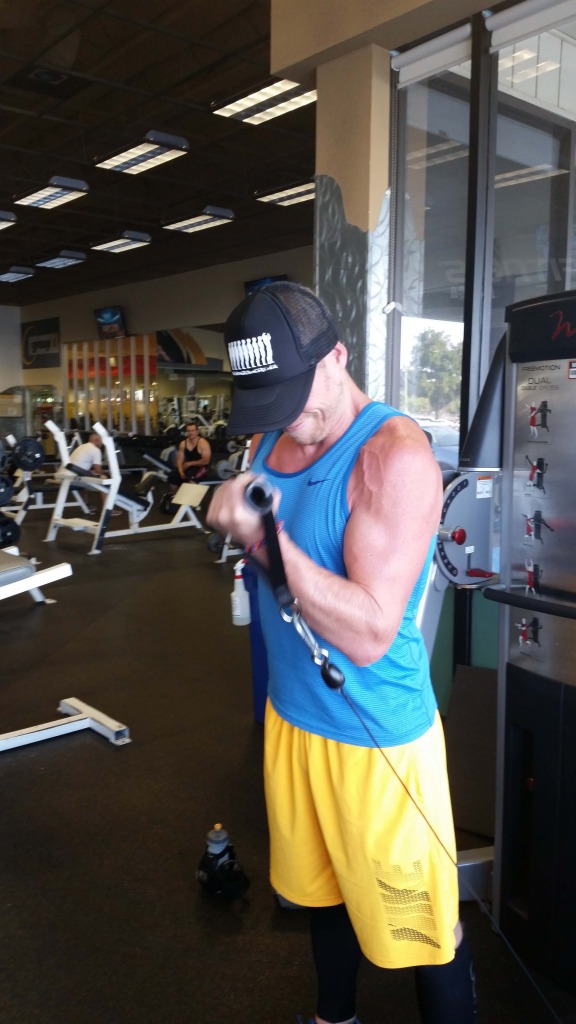 After years of this, I started to incorporate other means of fitness into my regimen. I also started to change my diet. I started playing basketball after being invited by an old friend, and also got into Jiu Jitsu. Fitness was now becoming fun, and I was addicted. I was feeling better, looking better, and having fun. What else could you ask for? All this while though, I never forgot my real driving force, which was and has always been my daughter Avery. I was now sweating away the pounds and doing it with a smile on my face which I NEVER would have thought possible.

After a few years went by, I ran into an old friend at a coffee shop which turned out to be one of my biggest life changing events. She saw that I had lost a ton of weight and invited me to run with her running group. I had never been a runner and was definitely scared and nervous… but I thought “what the heck?” – my weight loss had kind of hit a plateau at about 260 lbs, and this could be something to get me over the hump. 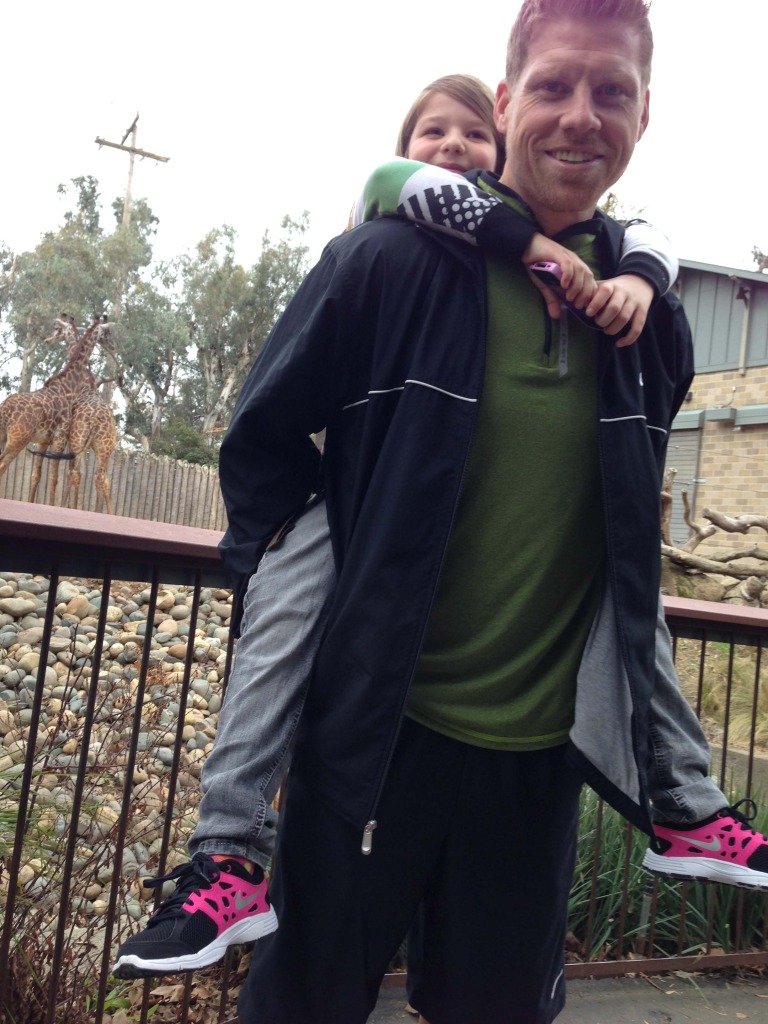 I showed up on a Saturday at 7 a.m., after they had run 6 miles, and I was going to go for the second loop of 6. We started off and it wasn’t so bad, but by a few miles in I was dying, covered in sweat and out of breath, but it felt great and embarrassing at the same time. I was able to finish the 6 miles on my own two feet and was asked to come back – I said I’d let her know.

I decided to run a few weeks on my own to build up some endurance before going back, but I did go back. Turns out I had a great reason to go back, because who knew that a few years later, one of the members of the group (Lisa) would go on to become my wife in Hawaii on 10-15-2014. That day in the coffee shop was life changing – we have become running and workout partners, as well as best friends. Since becoming a runner, I have since completed 3 marathons, 6 half marathons, 2 tough mudders, and a handful of local 5Ks and 10Ks. 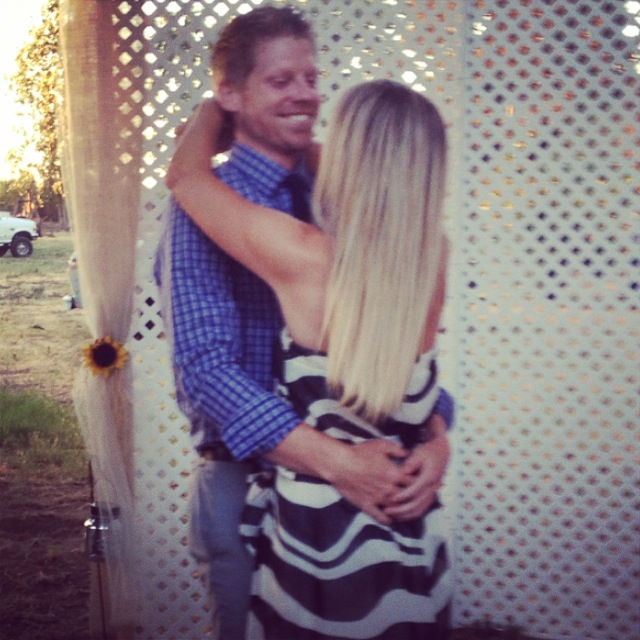 As of late, I’ve incorporated weight training into my routine. I’m down from 425lbs to my current weight of 190lbs. I have now met with a nutritionist as well as a trainer (Joey O’Mullen) who suggested Quest to me. My goals have gone from losing weight, to getting super fit and toned.

This is where Quest Nutrition comes in. Trying to build muscle and lose body fat is not easy. But with my new found knowledge of nutritional value of foods and a proper weight training program, I am well on my way. Fitting into my new diet perfectly, Quest Bars allow me to clean cheat every day of the week. With the perfect combination of high protein, high carbs, and low sugar and low fat I can choose to eat a minimum of one bar a day and stay within my macros plan. Not only are they healthy, but they are absolutely delicious. They are by FAR, the best tasting bars on the market. White Chocolate Raspberry bars, Cookies and Cream, and Cookie Dough are simply amazing along with all of the other flavors, but those are my absolute favorites. The bars allow me to diminish my sweet tooth while eating healthy. All the cravings for bad unhealthy food go away with these bars in my diet. They are quick, simple, delicious, and easy to track. My daily caloric intake is now 2400 calories, with 200 grams of protein, 280 grams of carbs, and 54 grams of fat. This diet along with my fitness program will allow me to reach my goals. 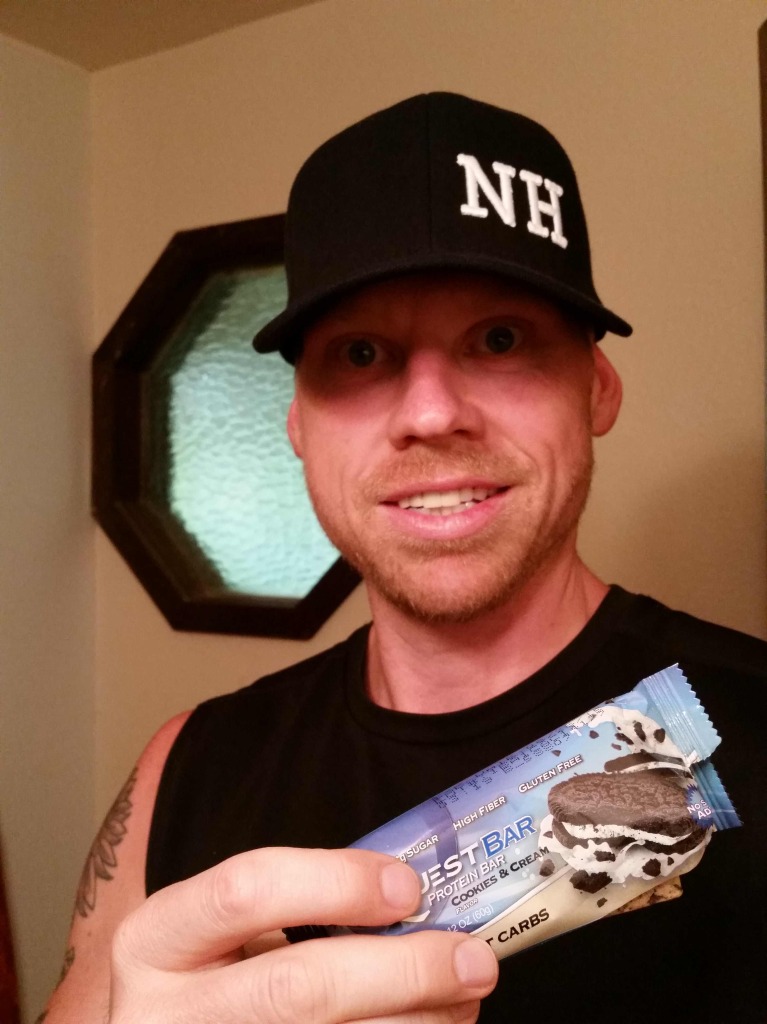 Overall, throughout my journey, not only has my physical body changed, but everything about me has changed. I am no longer embarrassed to be seen in public or ashamed of what I am. I am proud of who I have become – the father I am, and the husband I am about to become.

My main goal in life now is to spread the word that anyone can do what I did, if they set their mind to it. I want to lead and inspire others to make the same changes I made to better their lives. With first hand knowledge of what life is like as a morbidly obese person, I feel I can bring a touch of sympathy and empathy to others going through the same thing who want more for themselves and to go the route I went. I have started a website which is a work in progress with the intention of helping others who were in the spot I was in many years ago. I’d love to get into public and motivational speaking to tell people it is possible. I have done it and so can you. 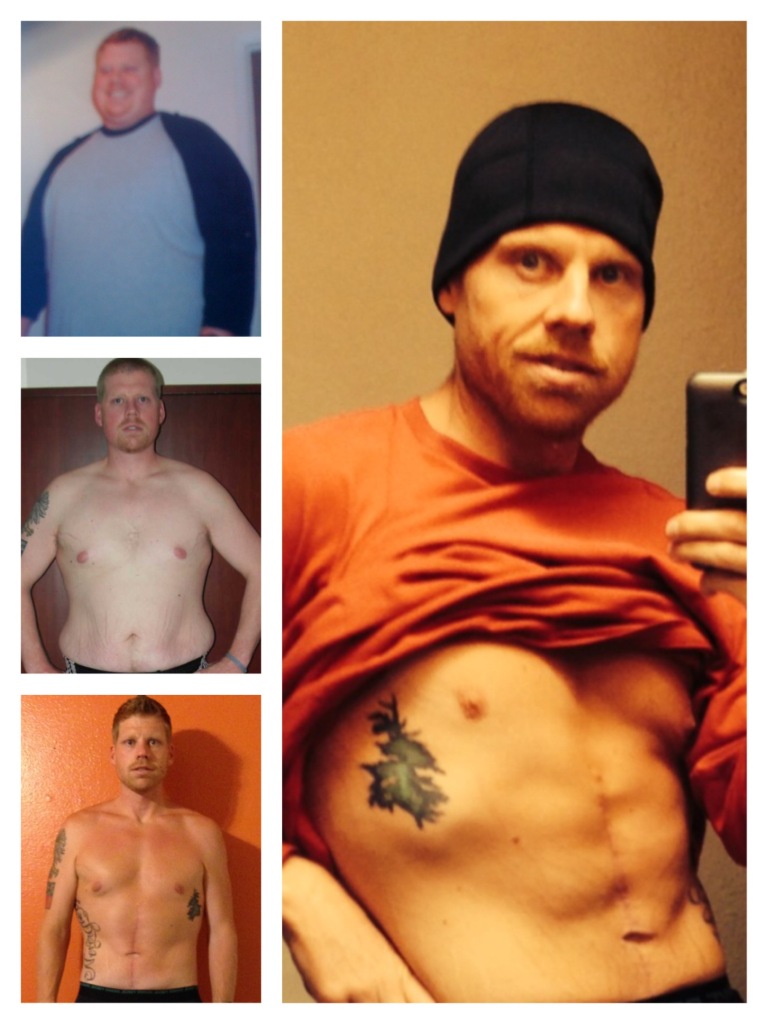