I started on my weight loss journey in January 2013, I was 29 years old, and the following month I would be turning 30. I knew something needed to be done, I was 320 pounds and miserable. I’d let myself fall well past the point of physical or emotional happiness.

I was wearing XXXL shirts, 44 and 46 inch pants – while spending my days sweating regardless of my actions. I had quite simply given up on myself and ultimately if I continued down that same path it would have certainly lead to my demise.

My emotional state was the worst it had ever been, and I was certainly lost. I found myself in January looking at pictures from an event that took place in September of 2012 – this event required I wear a tux. It was pure embarrassment. It was finally a wake-up call that my current morbid obese state needed to be rectified.

I started by giving myself a goal to keep focused. My father has been a skydiver for years and because of my weight I was unable to jump with him until I dropped below 250 lbs. This would be my goal over the next few months.

I pressed forward but learned my mindset was definitely my biggest struggle. It was a constant battle to convince myself I could do it and it was possible. Struggling to keep focused on why I need to do it and what it would be like if successful. I was tired of living my life as I was.

I started by eating far less then I had previously. With the assistance of a smart-phone application. I started tracking everything I consumed. Again however – an unbelievable wake-up call was learning what I had been doing to myself and the kind of calories I had consumed on a regular basis.

I found that I would easily double if not triple or quadruple my recommended daily intake. I understood carbs, fats, proteins, calories and so forth, but simply refused to follow or care to pay attention to these things. I’d simply eat and eat in complete disregard. 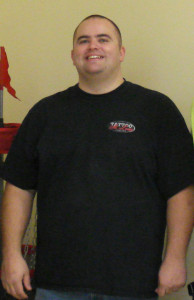 My first 20 pounds or so dropped relatively quickly after I started. Simply by eating and following the application recommendation for my current weight. I cut my carbs, while increasing my protein intake. I joined a local gym and started to slowly plug away with what I felt at the time was a nearly impossible goal. I started to see weight coming off slowly over the next few months. It helped motivate me to stick with strict eating habits and a more serious workout routine.

It was a huge struggle – but by the time June 2013 arrived I’d dropped 70 pounds and completed my first skydive with my dad while he was in free-fall next to me. I continued my weight loss over the next few months but felt I needed another goal to chase. 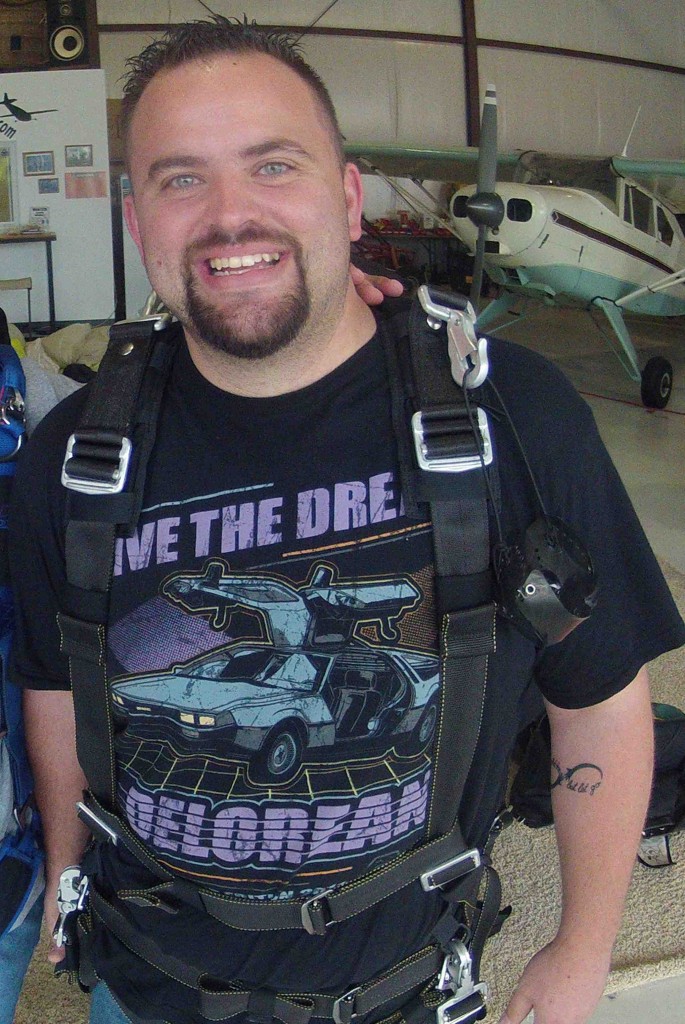 On September 10th 2013 I did set another goal. This time to run a 5k before the quickly approaching Illinois winter was set to arrive. I started by running a local trail with a half mile, it hurt so bad I wanted to give up yet again. I was feeling the pain again of what I had done to myself, luckily I’d had enough success over the past few months that I was determined to do everything I could to meet yet another goal.

In less than a month I challenged myself and ran my first 5k in 26 minutes and 39 seconds. I was completely hooked.

I was dropping weight even quicker now – I was actually doing very well and feeling great because of my running. I quickly signed up for another 5k then an 8k and a 10k all by November 10th. I’m now running half marathons without struggle and feeling unbelievable. Running has become my release and escape from my troubles and stress of daily life. I joined a running club and found great enjoyment doing group runs and other events with other runners. 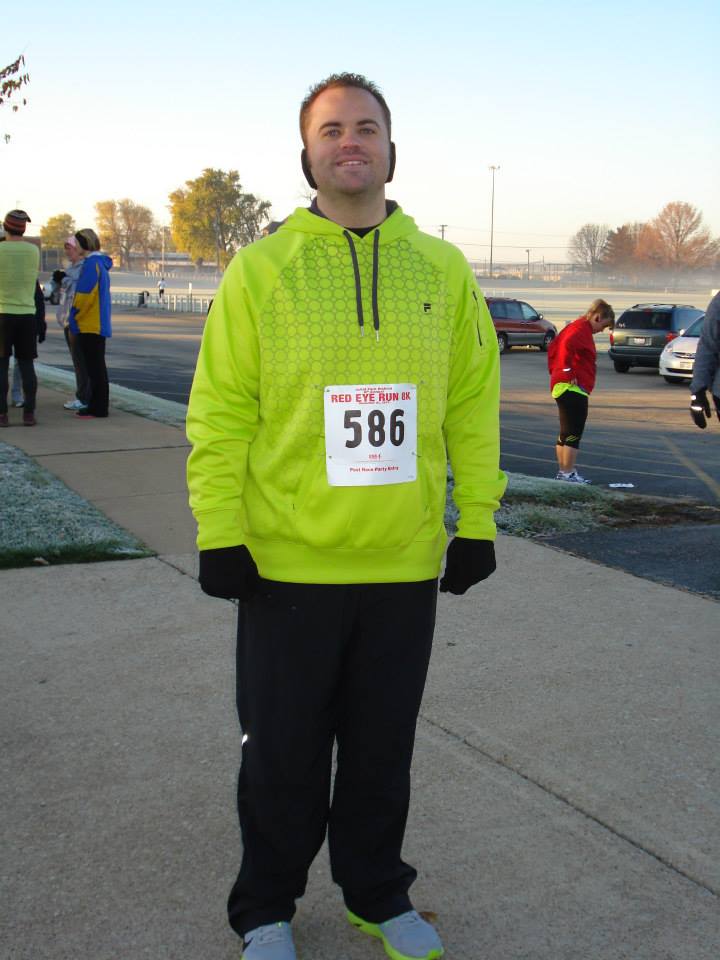 I am now 184 pounds and wearing 32 inch pants and size large shirts. I got in contact with the company that I rented my tux from in September 2012, was refitted and learned I lost a total of 49 inches. And in January 2014, I met another goal and what I feel my most rewarding to date – I’m now a personal trainer and manager at Patriot Boxing and Fitness in Mokena, Illinois.

It’s truly an amazing opportunity to help others with what I struggled with myself. Fitness has become a huge passion in life. I have made a complete life style change as a result. I strive daily to keep myself motivated as well add to an ever growing list of goals. I no longer wait until one is complete before making another. I now know what I’m capable of and how to meet the goals before they are even started. 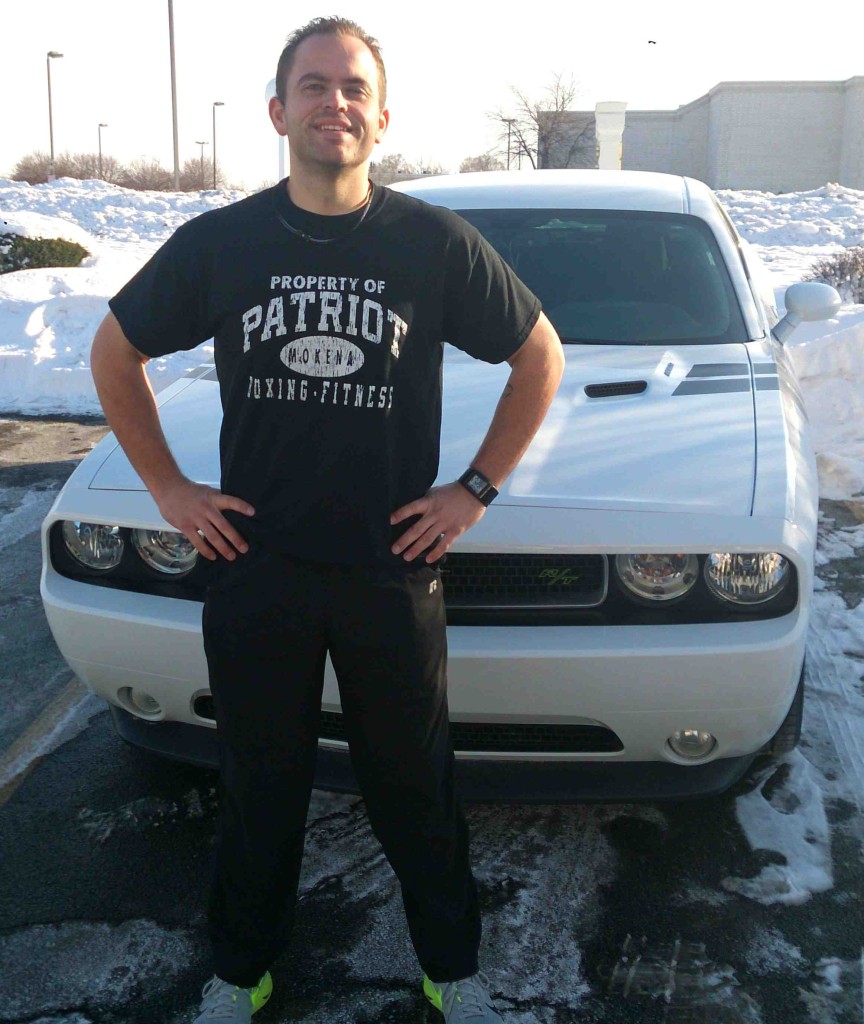 I have come so far and feel so lucky having the support and surroundings I’ve had. Shedding what you don’t need, surrounding yourself with what you do and keeping focused on goals and you will realize your potential. It is possible, it can be done, and it’s so unbelievably worth it. Never give up on your dreams and goals.

Get in touch with Aaron here, and follow Patriot Boxing Mokena here!