Sometimes, Google has a lot more to say than you expect and it can come in some not-so-subtle ways. It’s one thing to Google yourself. It’s another to Google your nation. While searching for a thumbnail for the What Americans are Eating post, I came across some disturbing results.

Check out the Google Image results for American Diet. This basically tells you what the Internet thinks of us Americans in picture form. 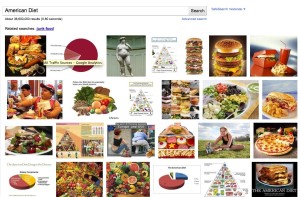 The first thing to notice is the alternate search suggestion – “Junk Food”. The American diet is synonymous with junk food. Nice. Although I suppose we’ve always known that. The images are of fast food and fat people (except for the one girl stretching. Thank you stretchy girl!) Being such an Internet geek, this one hit home. It’s just … disheartening. There isn’t even a juicy steak on the first page of results. America AKA the Nation of Refined Carbohydrates.
Here is a random sampling of other countries. 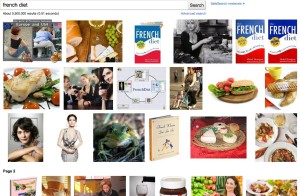 This is French Diet. Notice that first image which compares the French to Americans. Jeesh, thanks Google. Hit me when I’m down. No burgers, no pizza. Not even French fries. Mostly slim women, and the cover of a book (called, of course, The French Diet).

And the Greek diet.

A bunch of healthy foods – Salads, feta, meats, beans. (and a random fat dude). No tubs of lard here. 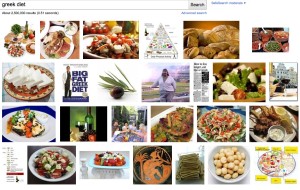 Of course this is the Internet and far from scientific. But, en mass, there is at least a nugget of truth here. It certainly isn’t a coincidence that our results are drastically worse than Greece or France.

At least I got my thumbnail quickly.